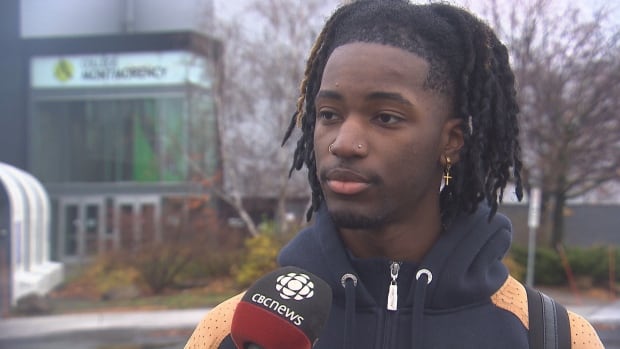 Jean-Michel Duquette, a third-year psychology student at College Montmorency in Laval, Que., says he was standing near the front door of his school on Friday when suddenly he saw people running.

Duquette was one of hundreds of students on campus when a shooting occurred in a park near the school in the Chomedey neighborhood, leaving three people in hospital with gunshot wounds that did not put their lives in danger and a fourth with injuries believed to be due to broken glass.

After the victims took refuge inside the school, the campus was locked down, confining hundreds of staff and students.

“I started running with my friend, just to try and see what was going on…because we’re at school and someone’s bleeding, so we’re trying to help them,” Duquette says.

People inside the school were slowly evacuated from the building shortly after 10 p.m. – more than four hours after the lockdown came into effect.

While police say there was no danger to those confined on campus, Duquette says the incident left students feeling unsafe.

“If they can do this stuff in a school, it becomes dangerous. Like you’re not safe anymore. The city has to do something,” he said.

Police said no shots were fired on campus and they could not say whether the victims were students at the school.

However, this does not reassure Jean-Jacques Nduita much.

“When I hear something like this, I get worried as a parent,” said Nduita, whose daughter comes to school every Saturday for a swimming lesson.

He says he wants the city to crack down on the use of guns to make the neighborhood safe.

Brochet says police are still looking for the suspect or suspects in the shooting and are asking for the public’s help.

He confirmed that a victim aged between 19 and 20 was involved with a local street gang known as the Flamehead Boys, but did not provide further details.

Brochet says the city has seen shootings drop by half this year compared to last year thanks to a policing project launched last spring, “but what we’re seeing now with the events that happened yesterday, we’ve there is still work to do.”

Referring to gang violence in the city, Brochet says officers will continue to crack down.

“Until these actions, which have no respect for human life, stop, we will not let go and we will be on their backs,” he said.

The mayor asks for more support for Laval

At the same press conference on Saturday, Mayor Boyer told reporters he had spoken with Quebec Public Safety Minister Francois Bonnardel to request more funding to help address gun violence in the city. .

“The fact that we have seen many and many more events in recent years involving young people, more [firearms]even if we invest a lot of money… I was asking for financial support from the provincial government, just as Montreal received it,” said Stéphane Boyer, referring to the $250 million for Montreal during the summer.

Boyer says the city has already added $1.2 million to the police budget this year to allow more investigators to investigate street gangs and weapons offenses, but he says the city needs to have the means to invest more in community outreach to tackle the problem at its roots.

“Beyond the police, we must give our young people the means to get involved, to develop their sense of belonging, of pride. We must give them other opportunities than going to organized crime”, he said.

Boyer and Brochet both say that despite what happened on Friday, the city is safe and they are working hard to curb the violence.

“I want to reassure people that we are doing everything we can to fight street gangs,” Boyer said.

Brochet says he wants to send the message that the area is “very safe around the college.”