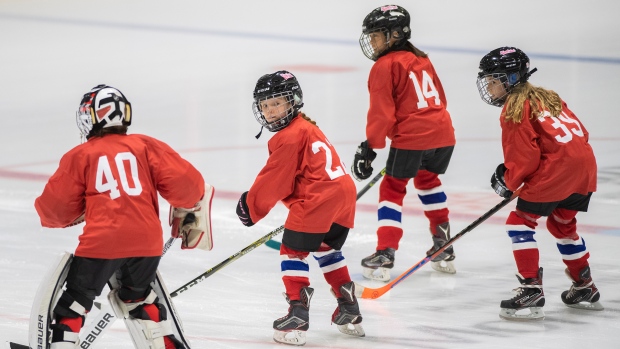 Women’s and women’s hockey in Quebec lagging behind Ontario

MONTREAL – Despite its growing popularity since the 1990s, women’s and women’s hockey in Quebec lags behind Ontario.

In 2019-2020, there were eight times more girls registered for hockey in Ontario than in Quebec.

According to the latest Hockey Canada report, 51,465 girls were registered for hockey in Ontario in 2019-2020, which represents 21% of the province’s registrations. For the same period in Quebec, 6,618 girls played hockey and they represented only 8% of registrations.

Ontarians also outnumbered Quebeckers seven to one on the national team at the last world championships.

â€œThere is a myth in Quebec that if girls play with guys they will get better. If that was the case, the girls in Ontario wouldn’t be as strong, â€said Daniel Taillon, director of Hockey Montreal FÃ©minin.

He believes that in order to increase the number of registrations and retain female players in Quebec, female hockey players must develop “by playing with other girls like in Ontario” and that the development of female hockey requires the creation of more teams and leagues for women.

â€œIf you go to an arena in Ontario, the offer is there for a girl who wants to play on a women’s team,â€ she said. â€œUnfortunately in Quebec, the offer is not yet there in all regions, so there are girls who have to register with the boys, and sometimes the young player ends up being the only girl on the team.

Sauvageau points out that girls play hockey longer when they play with each other rather than with predominantly male teams.

â€œAt a young age, there is no difference on the ice between boys and girls, but as they grow older, girls often look for a women’s team, and if they don’t find one, they look for another sport. or stop playing. sports, â€she said, stressing thatâ€œ abandoning sport â€is a big problem among adolescent girls in Quebec.

In fact, according to the latest Quebec survey on physical activity and sport, about 15% of teenage girls say they are active, compared to 23% of their male peers.

But before you register your daughter in hockey, you should know that there is a program in your area.

In Montreal, a young girl who wants to play hockey on a women’s team must register for the Montreal Women’s Hockey program. She will then find herself in a group of players from all over the city. Hockey MontrÃ©al FÃ©minin is independent from the minor hockey associations in the various neighborhoods, which have no obligation to promote women’s teams.

ChloÃ© Deraiche, a volunteer involved in the development of women’s hockey, believes that the various minor hockey associations should make known, or at least mention, the existence of women’s hockey during registration periods.

â€œWhen I signed up my daughter to play arena hockey a few years ago, they never mentioned the existence of women’s teams,â€ she said, adding that she had discovered women’s teams by searching the Internet.

His daughter Charlie, who started playing with boys, now plays in a girls’ league.

â€œIt’s worth it because the girls really have fun together. I really saw a renewed motivation for field hockey in my daughter and a sense of belonging that I hadn’t seen before, â€said Deraiche.

Marcel Patenaude, director of hockey for Hockey Quebec, does not believe that minor hockey associations should be obliged to mention the existence of female hockey when registering, but recognizes the importance of promoting it.

â€œSome associations want girls to play with girls, but not all associations do, and ultimately it depends on the girl,â€ he said. “If all the girls played with each other it would create an even stronger role model and for us it is also easier to observe and recruit the different players when they are together which would be ideal.”

Sauvageau adds that “women’s hockey took a long time to organize in Quebec”.

â€œIt’s all about volunteering and a lot of times you start to see some fairness, but there is a natural interest in men’s hockey, supposedly because there are opportunities for our boys to compete.

Among the inequity problems faced by some women’s teams in Quebec are access to the rinks and the quality of the schedules.

â€œSome reviewers told us that there were fewer ice hours available for girls and fewer good choices for ice time, whether it’s very early or very late weekends, but you have to be careful. ; these are observations that change from one region to another. , it can vary greatly, â€said Sauvageau.

Patenaude recognizes that the quality of the ice time is an issue and maintains that his organization “develops clear guidelines for the different associations” so that there is more equity between the boys ‘and girls’ teams.

Of the 22 players on the Canadian roster at last summer’s Women’s Ice Hockey World Championships, 15 were from Ontario and only two players, Marie-Philip Poulin and MÃ©lodie Daoust, were from Quebec.

In 2002, while Sauvageau led the team that won gold at the Olympic Games in Salt Lake City, six Quebecers and nine Ontarians were part of the team.

Sauvageau believes that â€œhigh level opportunitiesâ€ other than the national team are necessary to encourage the participation of young Quebec women.

â€œAfter university level, there is nothing for elite players in Quebec,â€ she laments.

While waiting for the return of a professional women’s team in the metropolis, Sauvageau, who is also the general director of the Carabins hockey program at the University of Montreal, offers a â€œprofessional structureâ€ to elite players.

Since the dissolution of the Canadian Women’s Hockey League in 2019, Sauvageau has managed the High Performance Hockey Center 21.02, which is located at the Verdun Auditorium.

Elite players can receive state-of-the-art training, state-of-the-art scientific and medical services, and access to facilities of international standards. The government of Quebec recently invested $ 375,000 in the center, in part to encourage â€œthe development of inspiring role models for young girlsâ€ and â€œto promote the representation of Quebec on the national teamâ€.

This is a unique project in Canada that aims to bring together young talents and develop them.

â€œThe next step is to build a professional team at the top of the pyramid,â€ said Sauvageau.

Last summer, Center 21.02, which refers to the first Olympic gold medal won by Canadian women on February 21, 2002, organized the Women’s Hockey Summit, which aimed to compile a report on “all the observations, challenges and findings related to women’s hockey “In Quebec.

This report, which will mention in particular “the insufficiency of resources allocated to women’s hockey, the need to establish a common action plan and to unify the offer of services”, is currently being drafted and will be published very soon. .

– This report by La Presse Canadienne was first published in French on November 6, 2021.