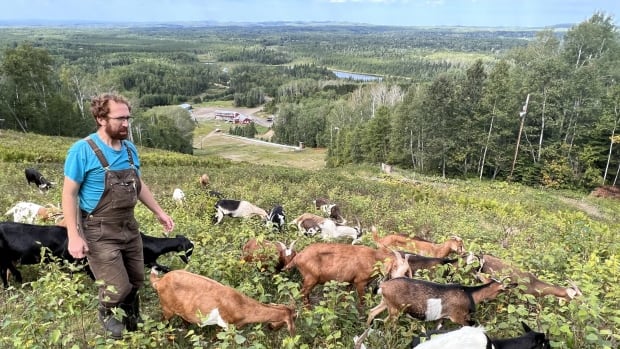 When the owners of Mount Baldy Ski Resort in Thunder Bay, Ontario, posted an unusual advertisement seeking help for a summer goat herder, resumes poured in from across Canada and as far away as Australia.

As they sifted through the candidates, Daniel Kardas, a former member of the Canadian ski jumping team, and his brother Jason weren’t surprised to find that almost no one had ever herded goats before.

The Kardas brothers quickly found the right candidate right in front of them, in Peter Cosbey.

“I won’t lie. Most people had no experience. I mean, who is a goat herder? Who even does that?” Daniel said.

“We went through everyone, and then Peter came up to me and said, ‘Hey, what about me? I’m interested in doing this. You know, he likes goats and he’s good with them. And I say, “Yeah, let’s try.”

From the symphony hall to the ski slope

Cosbey was a professional cellist in Toronto before moving to Thunder Bay with his partner to take life on a slower pace. He spent the last winter moving hoses and hydrants around Mount Baldy.

He used to bring water to the barn and had already raised two goats.

Cosbey’s old routine of performing in prestigious venues with the Canadian Opera Company and the National Ballet of Canada was a far cry from cutting down trees and herding 30 goats on a 400-meter ski slope in northwestern Ontario.

“I think most people I know in Toronto, when I told them I was moving to Thunder Bay, thought I was crazy. But in my opinion, it was a great lifestyle choice,” says Cosbey. “It’s not really slower – it’s just different, because now I spend a lot of time, you know, taking care of animals, growing a garden and that kind of stuff.”

Breeding proved to be a steep learning curve on a steep hill for Cosbey, and he found himself calling in reinforcements early on. At first, the goats didn’t do their job as organic lawn mowers, trampling the electric fence and returning to the barn where they spent the winter.

In one instance, the herd became separated and Cosbey found himself unable to leave the enclave where half the goats had followed him, while the other half escaped to graze on nearby flowers. The rest of the hill’s summer staff joined them with sticks and canes to gently surround the runaways.

Aside from occasional outbursts of disobedience, he found goat herding to be a simple job. He moved the fence uphill on each ski run once the goats chewed through the brush, their manure leaving behind a cool bed of iridescent green grass.

“Most days you don’t have to do much except the days when you move them is when you have to do a lot more work,” says Cosbey. “So basically check them out, get them water, make sure they still have food, make sure everyone still looks healthy. There’s about a month, one of them broke his leg, so he’s got a brace right now. I hope that one will be okay.”

Thunder Bay’s wet summer led to lush vegetation, which kept the goats busy, but also kept predators like bears, lynxes, wolves and coyotes away, which are known to lurk around the hill during the dry years.

It was also a particularly buggy year, but in the wind on the hill, Cosbey said he wouldn’t have had July and August otherwise.

“It’s really beautiful here during the summer. I mean, the views are just fantastic. Nothing beats working outside in nature with the animals. It’s kind of fun.”

The lazy gardener prepares to lay down his tools