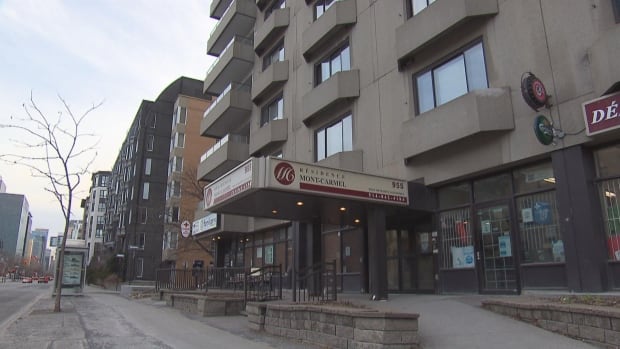 “We are not leaving”: Montreal tenants fight to block the transformation of a residence for the elderly into apartments

Constance Vaudrin, 76, said she was shocked when she learned in February that the new owner of the building she lives in intended to withdraw its status as a private residence for seniors.

She and her neighbors had already been informed that the new owner would maintain all services for the elderly tenants of Résidence Mont-Carmel, a 16-story housing complex with 216 apartments on René-Lévesque Boulevard in downtown Montreal.

Vaudrin is determined to stay, now among a group of more than 50 tenants in the building who have filed an injunction in the Quebec Superior Court to block the landlord’s plan to cut the services they depend on.

“What we have now is extremely important to the kind of people who live here,” said Vaudrin, who has lived there for five years, stressing that it is not just a house, but an entire community that they have built. the low.

The elders claim that the new owner broke the sales contract concluded with the previous owner. A notarized deed of sale obtained by Radio-Canada included a clause stipulating that the housing complex would retain its status as a residence for low-income tenants offering services to the elderly.

The home currently has an on-site nurse, a receptionist who checks in on residents, panic buttons in units, and common areas including a library and swimming pool.

The building was sold for $40 million in December 2021 to a company owned and managed by Henry Zavriyev, a young real estate investor who has a history of cleaning residential buildings in the name of renovations.

The company reversed its decision to maintain Mont-Carmel’s status as Private residence for seniors (RPA) in February, claiming to have discovered that the building was in poor condition with a vacancy rate of 12% – which had not been mentioned during the negotiations.

This has created an unsustainable financial situation for them, Zavriyev then said. He declined to comment on the tenants’ injunction request.

The company has since informed tenants that services in the building will be gone as of July 31 and that they are free to stay as long as they accept a 3% rent increase.

But there are many in the building with health issues that require help from the nurse on site, which means they will have to leave to ensure their safety, Vaudrin says.

Manuel Johnson is one of the lawyers representing the tenants and said measures must be put in place to prevent RPAs from having their status stripped.

More than 4,000 Quebecers have signed a petition addressed to the National Assembly calling for an amendment to the Civil Code that would prevent new owners from transforming RPAs into apartments.

The tenants will head to Quebec Superior Court on May 6, where they will seek a temporary injunction to prevent the removal of RPA status from their building until a civil trial can take place.

“We need to have a backup measure in the meantime,” Johnson said.

Some 200 residents live in Mont-Carmel, two-thirds of whom are over 75 years old.

“They hope to end the rest of their days there, they have created a truly amazing experience for themselves. living environment“, Johnson said.

“A lot of them are people who have fought their whole lives for social justice and so they’re used to doing community organizing. It’s their home, but it’s also their community.”