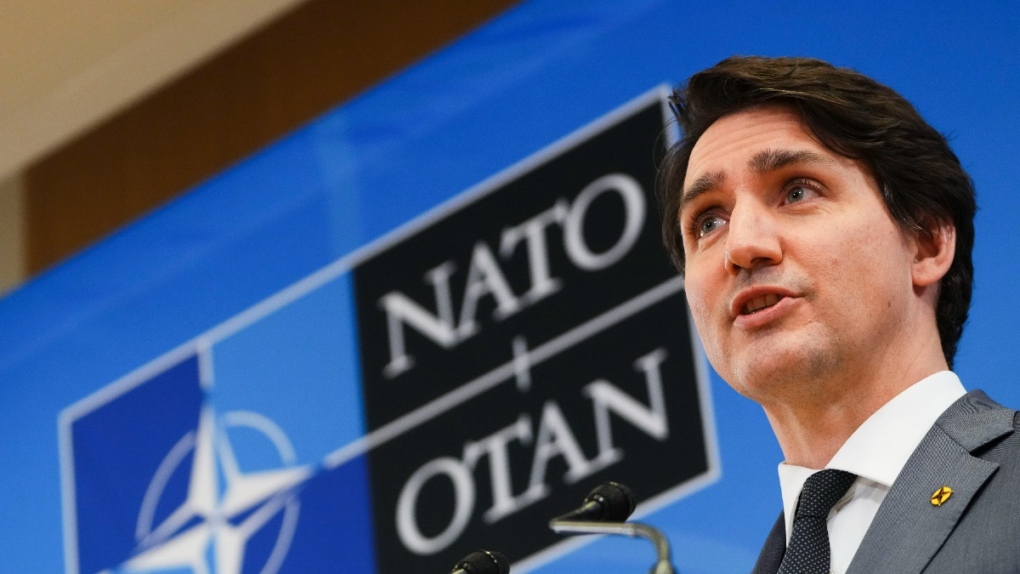 Prime Minister Justin Trudeau is expected to face tough questions at a major NATO summit this week, as a new report released by the alliance ahead of the meeting shows Canada is heading in the wrong direction by in terms of military spending.

Members of the 30-member military alliance agreed in 2014 to increase defense spending to 2% of their national gross domestic product, and the goal is expected to be front and center when leaders meet in Spain from Wednesday.

But the new report released by NATO Secretary General Jens Stoltenberg estimates that Canada’s defense spending will instead decline as a percentage of GDP to 1.27% this year, down from 1.32% last year and 1 .42% in 2020.

The report did not specify the reason for the expected decline, or whether it includes $8 billion in new military spending promised in the April federal budget, the target of which was not clearly defined.

Asked about the report at a press conference at the end of this year’s G7 meeting in Germany, as he prepared to travel to Madrid for the NATO leaders’ summit, Trudeau said that the government had announced several “significant” new investments.

These include $4.9 billion to upgrade Norad, the shared US-Canadian system used to detect incoming air and sea threats in North America, as well as plans to buy new fighter jets to replace the Canada‘s aging CF-18s.

The prime minister also said that Canada has repeatedly demonstrated its commitment to the NATO alliance by deploying troops and equipment in various missions, including leading a multinational NATO force in Latvia.

“Canada is still part of NATO missions and continues to step up significantly,” Trudeau said.

“We know how important it is to take action and we will continue to do so so the world knows it can count on Canada to advance the cause of democracy, the rule of law and opportunity for all. “, he added.

Successive Canadian governments have been reluctant to meet the 2% spending target, which the Parliamentary Budget Officer said would require an additional $75 billion over the next five years.

Instead, they highlighted Canada’s many other commitments to the alliance, including providing 700 Canadian troops to Latvia as well as several naval warships to assist NATO patrols in the North Atlantic and Mediterranean.

This is despite Canada accepting the goal, as well as Stoltenberg’s repeated urgings and criticism from US officials in Washington calling on Ottawa to invest more in its military and collective defence.

The continued decline in Canada’s defense spending as a percentage of GDP will almost certainly lead to even sharper questions for Trudeau in Madrid than previously anticipated, said defense analyst David Perry of the Canadian Institute of Business. world.

This is especially true given the confusion surrounding the government’s announcement last week of its intention to invest in upgrading Norad, with uncertainty about where the money will actually come from, when it will be spent and what.

“I guess they were hoping to send a message with the continental defense piece that regardless of what is happening in Europe, Canada has other defense commitments and that contributes to the overall security of the alliance” , Perry said.

“But the continental defense piece deployment mechanic would take away some of that.”

The fact that defense spending is on a downward trajectory as Canada faces pressure to contribute more overseas and grapples with major shortages of military personnel and equipment is also a concern, said Robert Baines of the Canadian NATO Association.

“I’ve always been amazed that Prime Minister Trudeau has the ease to dance to the very serious defense situation Canada faces,” Baines said. “Trying to do so many things and then having so many problems and resource challenges.”

To that end, Trudeau dodged the question of whether Canada is prepared to send more troops to Latvia, as NATO seeks to double the size of its forces across Eastern Europe in response to the invasion of Ukraine by Russia.

Latvia’s ambassador to Canada told The Canadian Press earlier this week that Canada was talking with allies about bolstering the Canadian-led battlegroup in his country.

The battlegroup in Latvia is one of four established by NATO in 2017, with Germany leading another such unit in Lithuania and Britain and the United States responsible for forces in Estonia and Poland. respectively.

Germany and Britain have both said in recent weeks that they are ready to lead larger combat units in Lithuania and Estonia, but Canada has so far remained silent on its plans in Latvia.

Trudeau also did not say whether Canada is ready to put more military personnel on high readiness, as Stoltenberg announced on Monday that the alliance plans to increase the number of troops on standby from 40,000 to 300,000.

“We have worked very closely with NATO partners, with the NATO Secretary General, and especially with the Latvians, where Canada leads the (battle group) and is committed to ensuring that we continue to stand up against Russia,” Trudeau said.

“We, like others, are making plans to be able to expand quickly,” he added. “And these are conversations that I look forward to having over the next two days at NATO.”

Baines predicted that additional troops and equipment to be added to the Canadian-led battlegroup in Latvia will come primarily from other NATO members, as Canada has only recently deployed more troops to the region.

The government announced in February that it was sending an artillery unit and 100 additional soldiers to reinforce the 600 Canadian soldiers already present in the Baltic state. It also recently deployed two additional warships to the area.

Perry said it’s still unclear how much more the Canadian military, which is about 10,000 short, has to spare.

“Maybe it’s possible to find some more in the back of the closet,” he said.

“But if the alliance is going to collectively step up with additional troop and equipment commitments, then I’m sure there will be a lot of pressure on us to be part of it as well.”


This report from The Canadian Press was first published on June 28, 2022.


— With files from Lee Berthiaume in Ottawa