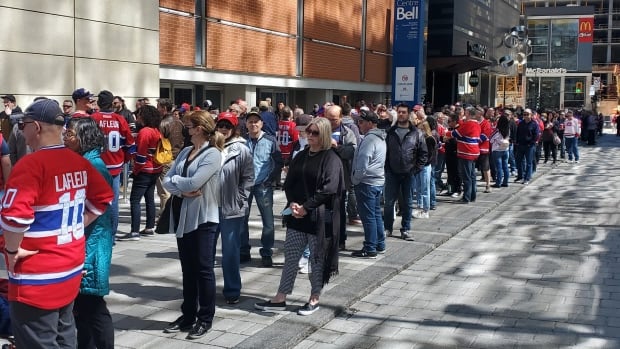 Thousands of Quebecers are taking the opportunity today to bid their last farewell to hockey legend Guy Lafleur.

The first of two public tours will take place at the Bell Center in Montreal until 8 p.m. Sunday, followed by the second Monday from 10:30 a.m. to 3 p.m. A state funeral will also be held on Tuesday.

Lafleur died just over a week ago at the age of 70 following a battle with lung cancer.

He led the Canadiens to four consecutive Stanley Cup titles in the 1970s and is still the all-time leader for the Canadiens. He had battled health issues, including a recurrence of lung cancer in 2020.

“Out of respect for the public, who have supported Guy over the years, the Lafleur family has agreed to share their grief with the community,” the Montreal Canadiens wrote in a statement last week. “As per the wishes of the family, all activities will reflect the late hockey legend: they will be humble and accessible.”

Visitors are asked to use the arena’s main entrance at 1909, avenue des Canadiens-de-Montréal. Dozens had already gathered at 9 a.m. Sunday.

Quebec Premier Francois Legault is also expected to visit the Bell Center as it opens at noon on Sunday.

“This national funeral in homage to the memory of Guy Lafleur bears witness to all the admiration and love Quebecers have for him. He forever marked our history and our national culture,” the prime minister said in a statement last week. , as he announced plans for a state funeral.

National funerals are reserved for “people who, for example, have had an impact on political life, as decided by the government”, specifies the province. The state funeral announcement for Lafleur follows similar honors for other Canadiens icons, Maurice Richard and Jean Beliveau, in 2000 and 2014 respectively.

Lafleur’s state funeral will be held Tuesday at Marie-Reine-du-Monde Cathedral in downtown Montreal, beginning at 11 a.m.

Saying goodbye to Guy Lafleur: how to follow the ceremonies on CBC