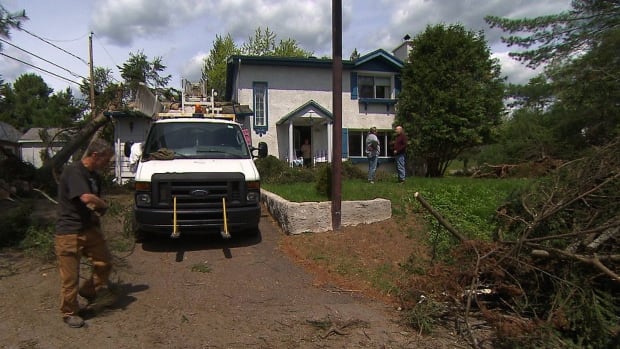 The deafening noise of chainsaws and cleanup crews filled the air in the normally quiet residential streets of Sainte-Adele, a town about 80 kilometers northwest of Montreal in the Laurentians, on Tuesday.

More than half of the city’s households and buildings, including City Hall and the fire station, have been without power since Saturday, when a severe storm swept through the province and knocked down several power lines.

Michel Tétreault is one of the residents affected. Twelve of his trees were downed during the storm, with some falling onto his garage roof.

“It was like snow outside the window – white, for about 30 seconds,” he said, describing the storm. “You couldn’t see anything.”

Tétreault lost the food he had in his refrigerator and freezer during a power outage. He relies on food deliveries from his family members and cooks on his backyard grill.

But he and his neighbors are not alone.

More than 112,000 homes across the province were left without power Tuesday afternoon, according to Hydro-Quebec.

Crews worked hard during the day, dealing with the 1,400 separate power outages still in effect across the province. Most outages are in the Laurentides, Lanaudière and Outaouais regions.

“Our goal is really to have the vast majority of people back tonight,” said Hydro-Quebec spokeswoman Caroline Des Rosiers.

“There are physically 1,400 places where our crews need to go to see and assess what happened and what they need to do to restore power.”

To make matters worse, most outages occur in remote locations that can take a while to reach, she said.

“Sometimes it’s hard to get to, sometimes [our crews] must work before you can reconnect the power.”

Additionally, each remaining outage affects a relatively small number of people, so restoring power to one location only slightly improves the overall situation, she explained.

Hydro-Québec sent some 700 teams on the ground Tuesday, including teams from regions that were not affected by the outages and even from New Brunswick.

More than 550,000 customers were without power at the height of the storm, according to the utility.

The City of Sainte-Adèle has installed a generator in one of its community centers so that citizens without electricity can recharge their devices, benefit from free Wi-Fi and use the toilets.

The municipality has also set up portable showers and opened access to the showers of one of the local secondary schools.

In addition to having no electricity, many residents also have no running water as they have wells that rely on electric pumps.

Although most streets have been cleared of branches and debris, Sainte-Adèle Mayor Michèle Lalonde said it’s likely many residents won’t have power until this weekend.

This includes his own home. “In the morning, I have my coffee using my barbecue to boil the water,” she laughs.

Other municipalities in the region also offer temporary services to residents who still do not have electricity.

This is the case of the neighboring town of Sainte-Agathe-des-Monts, which has set up free hot showers, charging stations, Wi-Fi and water for residents in need.

The city’s water plant and its recycling facility had to shut down due to electrical damage from the storm, but city manager Simon Lafrenière said repair work was underway.

Several area schools were unable to open on Tuesday due to storm damage and lack of power.

The municipal school of Saint-Alphonse-Rodriguez, a municipality located north of the Lanaudière region, will be closed for the rest of the school year. High winds ripped off part of the school’s roof and heavy rain damaged classrooms.

The school’s 150 students will have to wait until next Monday to be relocated to another space where they can finish the school year.

The storm also ripped off the roof of the municipal school gymnasium in Notre-Dame-de-Lourdes, another town in the region. Students are expected in class on Thursday.

Hydro-Québec asks citizens who see electrical wires on the ground to call 9-1-1 and refrain from touching them.