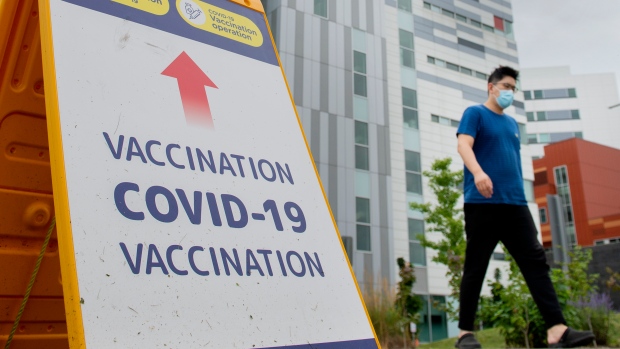 MONTREAL – The Quebec Ministry of Health and Social Services announced on Wednesday that this week’s Pfizer vaccine shipment to Quebec will be the last until further notice, as the COVID-19 vaccination campaign shoots at its end.

As a result, this week’s shipment of 585,000 doses of Pfizer vaccine will be, unless something changes, the last to be distributed to various health and social services establishments in Quebec, the ministry said in a statement. .

The government will receive a final shipment of 513,630 doses next week, but will keep them in reserve to “provide a first and then a second dose to late arrivals” or to administer a third dose in special cases, such as those at risk or those who have received injections of two different vaccines.

With “more than two million doses in stock”, Quebec says it has enough vials to meet demand.

If the epidemiological situation changes, it will always be possible to “place additional orders with the federal government,” the statement said.

In the event that the reserve doses expire and are not needed in the province, the ministry said they would eventually be returned to the federal government, possibly for redistribution to other countries in need.

The government also announced the gradual reduction of corporate vaccination centers, which have been set up in collaboration with the private sector.

The temporary clinics at the Montreal airport, Cascades and Rio Tinto have already been dismantled in recent days.

“It will remain easy to obtain the vaccine quickly, in all regions of Quebec, whether with or without an appointment,” read the press release.

On Wednesday, the Institut de santÃ© publique du QuÃ©bec calculated that 69% of the population aged 12 and over is fully vaccinated. In total, 84% of people received at least a first dose.

Prime Minister FranÃ§ois Legault has repeatedly stated that his goal is for 75% of eligible Quebecers to be fully vaccinated by September, a goal that will be achieved if the trend continues.

“It is important to achieve a high vaccination rate in the age groups targeted by the vaccination campaign in order to obtain collective immunity that will protect the entire population, including the youngest,” the statement said. .

– This report by La Presse Canadienne was first published in French on August 4, 2021.

“Let the unvaccinated stay at home”: the Quebec gymnasium requires proof of vaccination