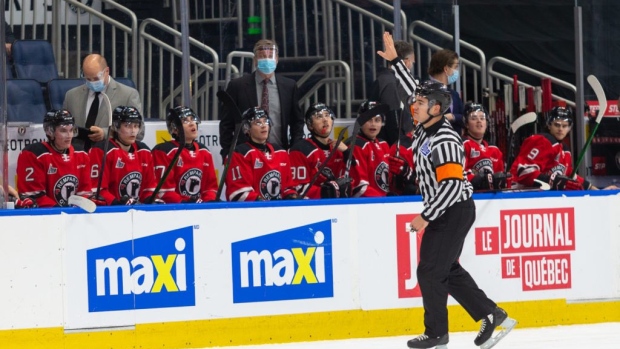 The Quebec junior hockey league closes its doors until January 7

The Quebec Major Junior Hockey League has suspended all activities until January 7.

The league says the break is necessary due to soaring rates of COVID-19 infection in eastern Canada.

Players will report to their clubs on January 3.

The QMJHL says it is working on updated protocols that will include preventative testing before players and staff arrive in the team environment.

In a press release released today, the QMJHL affirms that the safety of players and staff remains its top priority.

Postponed matches will be rescheduled at a later date.

The other two major junior leagues in the country, the Ontario and Western hockey leagues, are on the holiday break, with games in the WHL still scheduled to start on December 27 and in the OHL on December 28.

Scottie Barnes and Precious Achiuwa were added to NBA COVID-19 protocols by the Toronto Raptors on Tuesday, hours after teammates Fred VanVleet and Malachi Flynn were dismissed. There are now seven Raptors in league protocols.

Toronto is set to play in Chicago on Wednesday night after its game against Orlando on Monday in Toronto was postponed due to a COVID-19 outbreak on the Magic.

Olympic tennis champion Belinda Bencic tested positive for COVID-19 after her trip to Abu Dhabi and is showing “severe symptoms,” she said on Tuesday, a day after Rafa Nadal announced he also had tested positive.

Both players had traveled to Abu Dhabi to participate in the Mubadala Tennis World Championship exhibition event last week. Nadal also said he was having “unpleasant times” after testing positive upon his return to Spain.

â€œUnfortunately and even though I am fully vaccinated, I recently tested positive for COVID-19,â€ Bencic said on Twitter. “I am isolating myself now and taking all the precautions (measures) to get through this as best as possible because I am feeling quite severe symptoms (fever, body aches, chills).

“Although the timing is not ideal – as I was in the final stages of my preparations for the Australian Open swing – I will be heading to Australia as soon as I have been cleared and passed the period. isolation.”

Bencic lost to Tunisian Ons Jabeur, who replaced US Open champion Emma Raducanu after the latter tested positive for COVID-19 and withdrew from the event.

WATCH | Will NHL players go to the Olympics? :

Rob Pizzo addresses the giant elephant in the room: Whether or not the NHL / NHLH will end the Olympics. 5:34

Because the event was to be used as a last-ditch competition for long track speed skaters to be part of the Olympic team, the organization said it was working to adjust the selection criteria for the team for the Beijing Olympics in February.

The Washington Capitals’ game against the Philadelphia Flyers scheduled for Tuesday night has been postponed.

This is the 50th NHL game postponed this season for reasons related to the coronavirus. The league said COVID-19 issues with the Capitals resulted in the postponement.

That left the Tampa Bay Lightning against the Vegas Golden Knights as the only game left in the NHL this week. The league and the players’ association have agreed to start the annual vacation early and postpone games scheduled for Thursday.

Of the 50 games postponed, 45 have taken place in the past two weeks, with the delta and omicron variants spreading across North America. More than 15% of the more than 700 players in the league are on antivirus protocol, a list that continues to grow.

Healthcare workers on the alert as Omicron spurs increase cases