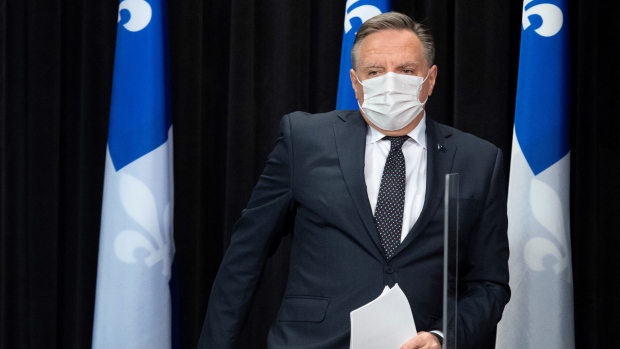 The Premier of Quebec, the lowest carbon emitter in North America, will put “a little pressure” at COP26

MONTREAL – Quebec is taking part in the United Nations Conference on Climate Change in Glasgow, also known as COP26, to “put a little pressure on all heads of state,” says its Prime Minister.

“When we look at the reports [of scientists], it is clear that we are not going in the right direction, ” Prime Minister FranÃ§ois Legault told The Canadian Press in an interview Tuesday in an Edinburgh hotel.

Legault is participating from Tuesday to Thursday in his very first mission as Prime Minister at a UN conference. The summit’s goal is to agree on other ways to limit global warming to 1.5 degrees Celsius, a tipping point that scientists have identified.

The leader of Quebec, often accused by his opposition of not being concerned about defending the environment, declared that to make politics without worrying about climate change “does not make sense”.

â€œIt’s like forgetting the biggest challenge we have,â€ he said.

The man who was elected in 2018 with a rather limited environmental platform now wants to lead by example, he said.

Quebec is, of all the federated states in North America, the one that emits the least greenhouse gases per capita, said Legault – just under 10 tonnes per capita, compared to an average of 20 tonnes. in Canada.

â€œQuebec must be present, if only to put a little pressure on the other heads of state,â€ he declared.

â€œIf you are in politics, it’s normal to come here and say: ‘Hey, we have to act, and maybe we look at Quebec, there are things that we do well.’ “

The Prime Minister had already said that during COP26, he intended to promote buses and electric trains designed and assembled in Quebec.

The promotional document of the Quebec mission argues that the province is “essential” for its “electrical expertise”, from Hydro-Quebec to the construction and recycling of batteries.

While everyone is calling on the United States to make more binding commitments to reduce greenhouse gas emissions, Legault has yet to unveil new GHG reduction targets himself.

Ultimately, all countries will be required to achieve carbon neutrality, zero emissions, in GHGs. When exactly is the question – the summit aims for all countries to agree to do so by 2050.

Despite Quebec’s less than excellent performance by 2020, Legault noted that Canada and the United States not only missed their reduction target for 2020, but even increased their GHG emissions.

He lamented the absence of China, the world’s biggest polluter, at the conference. He also criticized India, another big polluter, for postponing the target and saying it would achieve carbon neutrality by 20170.

“Without worrying, I have two sons aged 28 and 29, and it’s worrying, the future of the planet,” he said.

This report from La Presse Canadienne was first published in French on November 2, 2021. With files from CTV Montreal.

Braid: From Quebec, a proposal for a new big tax on Albertans