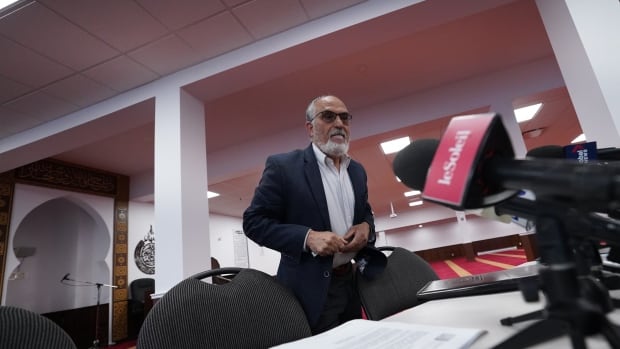 Leaders of the Islamic Cultural Center of Quebec have expressed disappointment at the Supreme Court of Canada’s ruling that the Quebec mosque shooter will be eligible for parole after 25 years – not the 40 years imposed by a judge or the 50 years claimed by the Crown.

“This decision ignores the atrocity and scourge of multiple murders [committed] in North America, as well as the hateful, Islamophobic and racist nature of this crime,” center president Mohamed Labidi said Friday during a press conference at the mosque.

Labidi said the decision was very upsetting for the families of the victims.

“Their fear is to see their children grow up – after 25 years, they will be adult men and women – and they will come across their father’s murderer in the streets of Quebec. This is the greatest fear of the families of the victims,” he added. said.

The center’s co-founder, Boufeldja Benabdallah, echoed that sense of disappointment.

“We take into consideration the rehabilitation of an individual whom we must not hurt, whom we must treat humanely and not unduly punish in cruel and unusual ways,” he said.

“But at the same time, the families affected by this must also feel that they have been represented and that this killer must be appropriately punished for what he has done.”

Impact across the country

Labidi stressed that this decision will have repercussions on the whole country, and not only on the Muslim community of Quebec.

He said tougher measures are needed to prevent mass shootings in Canada.

He mentioned the Texas school shooting Tuesday, stressing that this type of mass murder should be treated differently than a single murder.

“We must do something about mass killers, we must not see them as killers who have killed only once in their life and who have the possibility of being rehabilitated,” he said. declared.

“After 25 years [the killer] leaves, maybe he’ll do another murder.”

WATCH | The leaders of the mosques of Quebec react to the decision of the Supreme Court:

Muslim leaders “disappointed” by the decision of the highest court on Quebec. mosque shooter parole eligibility

Muslim community leaders expressed disappointment on Friday after the Supreme Court of Canada ruled that Alexandre Bissonnette, the man convicted in the 2017 Quebec City mosque shootings, can seek parole after 25 years.

Despite their disappointment, Labidi and Benabdallah expressed a desire for the community to move on.

“It allows us to close this legal chapter,” Labidi said. “Now we want to focus on the future.”

Benabdallah said the community will continue to help each other through this event.

“We are turning the page today, because we will not spend 25 years rehashing this,” he said.