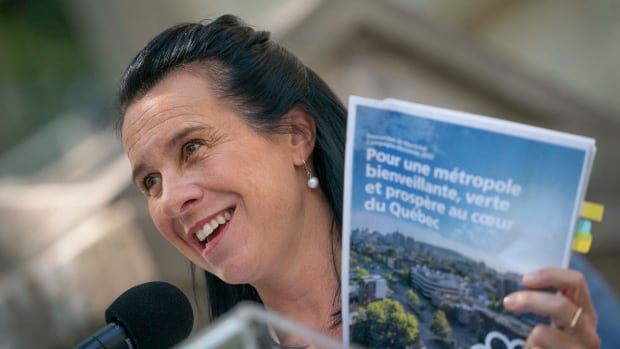 As Quebec provincial elections approach, Montreal Mayor Valérie Plante is calling on all political parties to come up with a clear plan to support the city’s vision for the future.

Montreal’s economic, cultural and social development benefits the entire province and must be continuously supported by the Quebec government, the city said in a statement.

The mayor asks the parties to support an overhaul of municipal taxation and to adopt a major infrastructure investment plan that corresponds to the City’s vision.

“The next provincial elections are truly a crucial moment in the history of Quebec to make the necessary choices for the future of the metropolis and of Quebec,” Plante said during a press briefing on Monday.

She said Montreal is already working to address issues such as climate change, gun violence and the housing crisis, but the city cannot do it alone.

Adequate financial support from Quebec would allow Montreal to achieve objectives such as achieving carbon neutrality by 2050, protecting the diversity of neighborhoods through the construction of social housing and the development of public transit, indicates the city.

“We have ambition, but we lack means,” Plante said.

Plante didn’t say exactly how much funding Montreal needs, but she made it clear that between now and the Oct. 3 election, provincial parties must commit to doing more for the city.

The next Quebec election is a crucial moment to make the necessary social choice.

The first chose to ask political parties for a clear and quantified plan for the green, safe, affordable and prosperous future of the metropolis. #polmtl pic.twitter.com/JpBt9GggLa

“While the City is increasingly proactive, its financial resources have remained essentially the same and largely dependent on property tax,” Montreal said in a statement.

“The next government of Quebec will have to support the City of Montreal in the overhaul of its tax structure. This structure will have to evolve towards a tax system adapted to the transformation of the economy and the responsibilities of local governments.

Along with overhauling taxation so more money goes into city coffers, Montreal is calling on the government to modernize expropriation laws and invest more in policing.

“The first thing we ask of political parties is a clear and quantified plan for the green, safe, affordable and prosperous future of the metropolis,” Plante said on Twitter.

The city also wants greater investment in the protection and construction of affordable and social housing.

Ensemble Montreal, the city’s opposition party, was not included in this vision that Plante is asking for, the councilor said. Abdelhaq Sari on Monday.

Sari, who speaks on public safety issues for his party, said he was surprised that Plante did not put public safety at the top of his list of demands.

“However, the mayor remained vague in her requests to Quebec. My observation: public safety is not Projet Montréal’s priority.

Chance of a recession in Canada until a coinflip