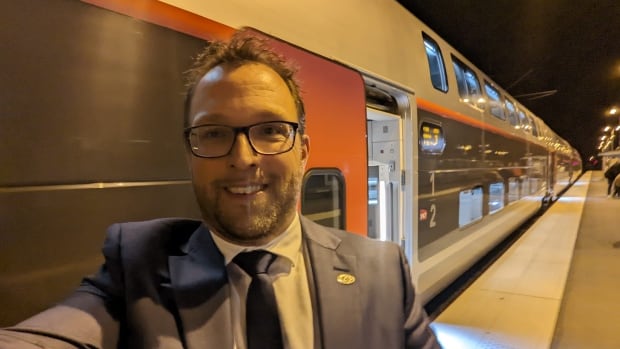 Daniel Côté holds several titles: mayor of Gaspé, president of the Union of Quebec Municipalities (UMQ), prefect of the MRC Côte-de-Gaspé. Now add an international hero to the list.

Côté is praised for intervening this week in a violent confrontation between a passenger and the driver of a high-speed train from Paris to Saint-Malo.

In a CBC interview Quebec AMCôté said he was quietly working on the train when he saw a passenger become aggressive and yell at the driver.

He said the man suddenly jumped on the driver and started hitting him. At one point, he said, the man put his hands around the driver’s neck and it looked like he was about to strangle him.

“A lot of people saw the [altercation]no one came to help the train worker, so I did,” he said.

Driven by a rush of adrenaline, Côté said, he intervened and managed to subdue the man in seconds. French media picked up the story, saying the conductor thanked Côté and offered him a free drink during his trip.

A Renaissance man of sorts, Côté said he used some of the training he had as a volunteer firefighter who also practices judo in the spare time he has left to be a city ​​politician.

He said that eventually the perpetrator apologized and left the train.

Côté said he came out of the fight unscathed, but he couldn’t guarantee the same for the other guy.

“Maybe the passenger has a sore arm, but that’s his problem,” he said with a laugh.

Côté was reluctant to speak to reporters and have his story come out as he said he was simply doing his civic duty by intervening in the attack.

I would like to highlight the bravery of @DanielCoteGaspe for this heroic gesture!

Bravo Daniel, a necessary act that represents the courage of Quebecers, even in France.

This did not prevent some local elected officials such as the mayor of Quebec, Bruno Marchand, from paying tribute to him for his courage.

“I would like to highlight the bravery of [Daniel Côté] for this heroic gesture!” he tweeted on Friday.

“Bravo Daniel, a necessary act that represents the courage of Quebecers, even in France.”

Anyway, the mayor is not in France to exercise his talents as a judoka (practitioner of judo) but for official discussions on climate change for the UMQ.

He said he was happy the driver was safe and happy to resume his original mission.

“Helping people is intrinsic to me,” he said.

This Old Thing: The bridal bracelet has a smart display