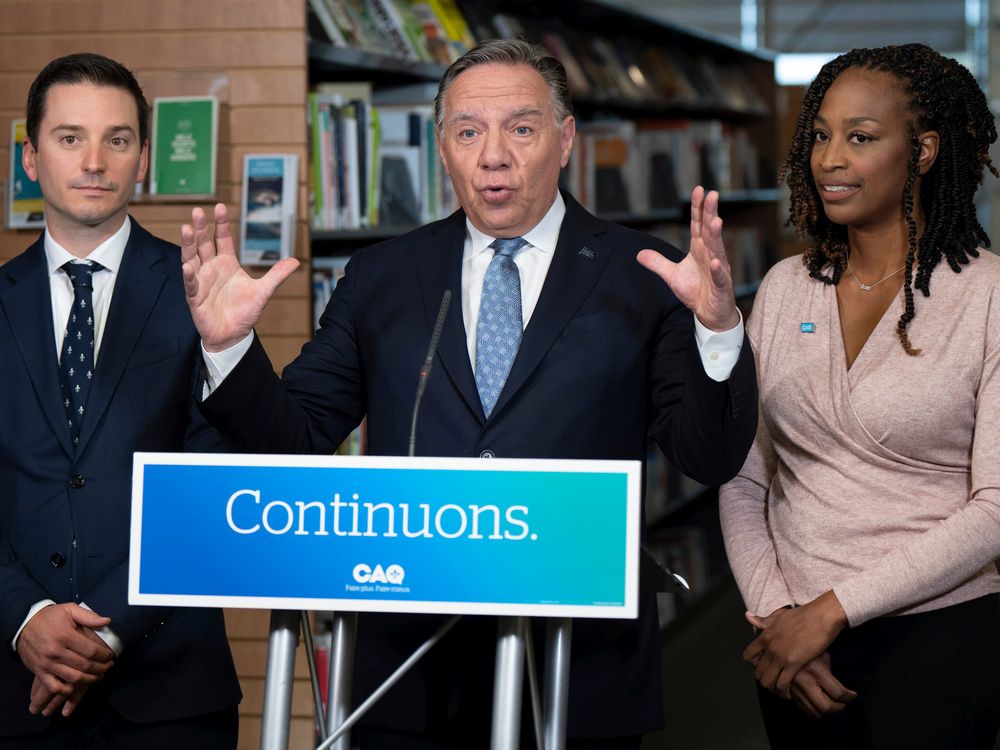 Coalition Avenir Québec leader François Legault may have been campaigning in Longueuil on Monday, but he couldn’t escape a barrage of questions from reporters about a Quebec tunnel project.

The project linking the provincial capital to Lévis is one of the CAQ’s big broken promises in the 2018 election — and the party’s main opponent in the Quebec City region during this election campaign will not let Legault forget it. .

“People in Quebec have been talking about it for decades, we want this bridge and (Legault) promised us this bridge four years ago and he flip-flopped,” Conservative Leader Eric Duhaime told reporters on Monday.

In a bid to woo Quebec voters in 2018, Legault promised he would build a “third link” across the St. Lawrence River – to complete the Pierre Laporte Bridge and the Quebec Bridge – and have the “first shovel in the ground” before the end of the CAQ’s first term in 2022. At the time, the CAQ said the third link could be a bridge or a tunnel.

Construction of a third link has not started and Legault recently admitted that there are no completed feasibility studies on his new proposal to build a tunnel linking the two shores, although a study is in progress.

Legault said the project would go ahead regardless of what the studies say because it is a “political” decision. His comments responded to Duhaime’s accusation that Legault “politicized” the Department of Transportation.

“There will be a technical study, then there will be a political decision,” he said. The studies will make it possible to “refine” the project and to estimate more precisely the costs of the four-lane tunnel, currently estimated at 6.5 billion dollars.

Legault’s original proposal for a $10 billion six-lane tunnel was scaled down to a four-lane tunnel with two of those lanes reserved for transit during peak hours. He said he would defer to the recommendations of the studies on how to split the tunnel.

Duhaime has spent much of the current campaign reminding voters of the CAQ’s failure and accusing Legault of covering up studies commissioned by the previous government on a third link.

“This is the largest project ever in the Quebec region,” Duhaime told reporters. “It is important that the population, before voting, has all the information at hand. Currently, there is no transparency.

Duhaime said he filed a freedom of information request with the Department of Transportation for reports and advice the government received on the proposed crossing.

Legault refuses to publish the studies — he says they were commissioned under the Liberals and do not apply to the new tunnel project he is proposing.

Duhaime said the tunnel is a waste of money and instead calls for a bridge connecting the eastern part of the two cities via Île-d’Orléans. The Conservative leader says a bridge would be cheaper and easier to build than a tunnel and would cost between $3 billion and $5 billion, with less risk of cost overruns.

But Legault says a bridge would sully the bucolic landscape in the east of the region, including Île-d’Orléans. A bridge, the outgoing prime minister told reporters in Longueuil, is “doable, but it’s not what we want.”

Other opposition parties scoffed at Legault’s jump to conclusions.

Parti Québécois leader Paul St-Pierre Plamondon said the statement is a good example of Legault putting the interests of the CAQ ahead of the public interest. “All of Quebec should ask itself the question: is this what we want for another four years?