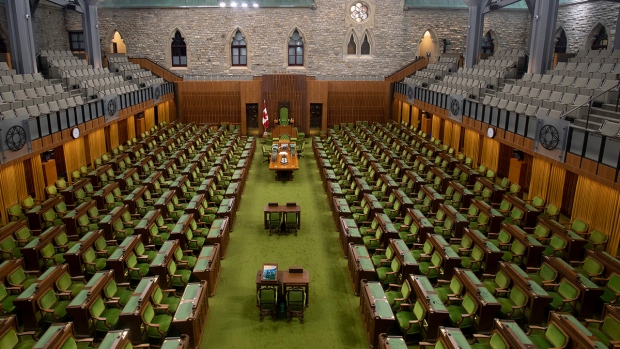 OTTAWA – Constitutional experts say the federal government has some leeway to maintain Quebec’s 78 seats in the House of Commons – or even add one or two – but it cannot guarantee that the influence of the province in the House will not fade over time without a constitutional amendment approved by at least seven provinces.

Quebec Premier FranÃ§ois Legault and the Bloc QuÃ©bÃ©cois are both demanding that Prime Minister Justin Trudeau intervene to ensure that Quebec does not lose a seat as the country’s electoral map is redrawn to reflect population changes.

And they went further, claiming that the House’s recognition of Quebec as a nation in Canada requires the province to have a constant share of seats in the House of Commons in perpetuity, even as its share of the country’s population declines. .

“I think the Quebec nation deserves a certain level of representation in the House of Commons, regardless of the evolution of the number of inhabitants in each province,” said Legault last month.

Under the seat allocation formula currently enshrined in the Constitution, Chief Electoral Officer StÃ©phane Perrault has calculated that the number of seats in the House of Commons is expected to increase from four to 342 – including three more for the Alberta, one more for Ontario and one more for British Columbia, the three fastest growing provinces.

Because Quebec’s population has grown more slowly, at least in part because Legault’s government slashed immigration, the complicated formula dictates that it should lose one of its 78 seats. It would be the first time since 1966 that a province risks losing a seat under the redistribution of constituencies, which is required by the Constitution every 10 years after each decennial census.

Perrault has no discretion in applying the formula. For him, it is strictly a mathematical exercise.

But the government of the day has some discretion and has used it in the past to adjust the formula from time to time.

The last time the formula was adjusted was in 2011, under the Conservative government of Stephen Harper. At that time, the government added 27 additional seats for the three fastest growing provinces, which were significantly under-represented.

And he allocated three more to Quebec, to keep the province’s share of seats at 23 percent, roughly equivalent to its share of the population.

Such a relatively minor change to the formula requires a constitutional amendment, although it can be done unilaterally through a law passed by Parliament, without seeking the approval of any province.

But there are other constitutional requirements for the allocation of seats that the federal government cannot change on its own. More importantly, it cannot derogate from the principle of representation by population in the Commons without an amendment approved by at least seven provinces representing 50 percent of the population (known in constitutional jargon as the 7-50 amendment formula. ).

These provisions have resulted in distortions such as small Prince Edward Island still having four seats in the House of Commons, although this has resulted in some Ontario ridings serving populations larger than the aggregate. of the island province.

These distortions give the federal government “very little leeway” to refine the formula for allocating seats without sticking specifically to proportional representation, according to University of Ottawa constitutional law professor Benoit Pelletier, a former cabinet minister from Quebec.

“This could give Quebec a seat or two seats or even three seats more than it normally would but you cannot go much further without (…) a constitutional amendment (7-50)”, he said in an interview.

Moreover, Pelletier said that repeatedly tinkering with the formula to give Quebec a seat or two more than its population deserves after each census could lead over time to a constitutional challenge that the federal government gradually violated the principle of proportional representation.

“I don’t know where the line is because it has never been decided, for example, by the Supreme Court of Canada … but there is a limit to what you can do,” he said.

University of Waterloo political scientist Emmett Macfarlane, who specializes in constitutional law, agreed that the seat allocation formula can be adjusted unilaterally by Parliament “but it must be kept within a reasonable margin to ensure proportionality.”

Determining what is within a reasonable range is “really tricky,” Macfarlane added. But he and Pelletier agreed that guaranteeing Quebec a specific share of seats in the House of Commons, regardless of its share of the population, would clearly go beyond what Parliament can do on its own.

â€œOnce you start violating representation by population and actually enact policy or constitutional change to protect one province at the expense of the interests of othersâ€¦â€ Macfarlane said.

Pelletier noted that the 1992 Charlottetown constitutional accord included a guarantee that Quebec would have 25 percent of the seats in the House of Commons in perpetuity. But it was a concession made by other provinces in exchange for Quebec accepting what it wanted, including an equal number of seats for each province in the Senate.

The agreement was ultimately rejected in a national referendum, including by a majority of Quebec voters.

Pelletier said he was “frankly surprised” that Legault demands a guaranteed share of seats in the House of Commons for Quebec when he must know that this would mean negotiating a constitutional amendment with other provinces which would bring their own demands to the law. table.

“You cannot seriously think that you are going to get 25 percent or maybe a little less MPs without making concessions to the other federal partners,” he said.

Given the reluctance of political leaders to reopen the constitutional box, Pelletier suspects that the Trudeau government will introduce legislation to adjust the formula so as to maintain the current allocation of 78 seats in Quebec.

To avoid straying too far from the principle of proportional representation, Macfarlane said maintaining Quebec’s 78 seats may require giving the three fast-growing provinces even more seats than currently planned.

In this way, “Quebec is always outstripped in proportion (of seats in the House of Commons) but the province does not face the indignity of having a seat withdrawn,” he said.

So far, the Trudeau government has had little to say on the issue. Trudeau said the government is “carefully considering” redistribution and has clearly “heard the concerns of a number of people, including Quebeckers” about the current seat allocation formula.

This report by The Canadian Press was first published on November 5, 2021.