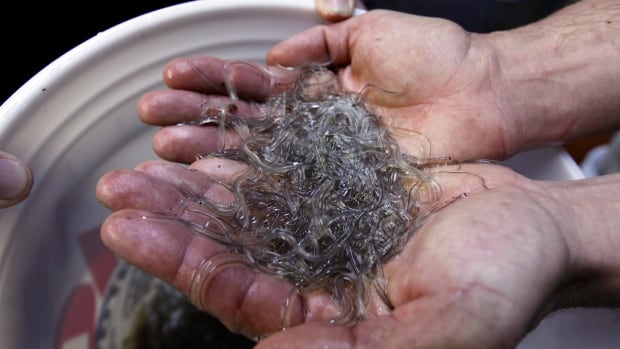 The fate of baby eels worth $400,000 seized in Halifax is unknown

Fisheries and Oceans Canada (DFO) seized 80 kilograms of live baby eels at Halifax’s Stanfield Airport on May 30, CBC News has learned, but it’s unclear whether the transport – worth an estimated $400 $000 at recent prices – has been destroyed.

Baby eels or elvers are the most valuable species of fish by weight in Canada. They are flown to Asia where they are raised to adulthood for food. They are harvested each spring from the rivers of Nova Scotia and New Brunswick. There is also a fishery in Maine.

Sources told CBC News the fish had been destroyed, but the department declined to provide further information despite initially appearing to confirm this.

“DFO makes every effort to return fish to their waters after seizure, but in cases where it is not possible to determine where the fish came from, they must be destroyed,” the spokesperson said. Stephen Bornais in a press release. “This reduces the risk of pests, diseases, pathogens or invasive species spreading through watersheds.”

Now officials say he is under investigation.

“As the matter is part of an ongoing investigation, we cannot provide further details.”

CBC asked why the seizure had not been sold, but the department did not respond.

Brian Giroux, a commercial fisherman with the Shelburne Elver Group, said the destruction of such a valuable seizure would be “a very sad situation and not in line with the conservation mandate”.

“I’m sure an active buyer (or someone like me who could have shipped for them) was available to buy/ship these eels, but DFO never reached out,” Giroux said in a statement. at CBC News. “In almost every other fishery I know of, the seizures are sold and the proceeds go to the Receiver General for Canada. So there’s about $440,000 lost to the Crown that could have covered science, law enforcement or something else.”

The elver fishery in the Maritimes has been booming for several years.

It became a flashpoint for Mi’kmaq bands exercising treaty rights to fish for a living.

In 2020, DFO closed all elver fishing in the Maritimes after an influx of Mi’kmaw fishermen in Nova Scotia overwhelmed its ability to manage the fishery.

This year, Canada took back 14% of the commercial elver quota and gave it to the Mi’kmaw bands to fulfill their treaty right to earn a decent living.

Earlier this spring in New Brunswick, four Mi’kmaw groups were ordered by a judge to stop “threatening, coercing, harassing or intimidating” commercial fishers.

The judge also told bands to stay away from rivers assigned by DFO to commercial fisherwoman Mary Holland.

The injunction is temporary until the judge rules on a lawsuit Holland has brought against the native fishermen.