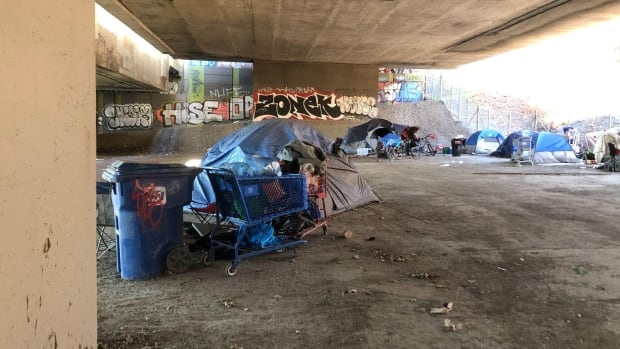 Quebec’s Department of Transportation has announced it is postponing the eviction of people living under the Ville-Marie highway in Montreal until it can help relocate them.

To clear the way for maintenance work, the ministry gave people residing under the freeway about two weeks’ notice to vacate the area by Thursday.

Following community outcry, the department suspended the eviction notice on Wednesday with no new deadline for leaving.

“We want to give them time to find alternatives that will meet their real needs,” said Ministry spokeswoman Sarah Bensadoun.

“The fact is that the Department of Transport and Mobility has no expertise on the housing system or housing companies.”

The Ministry of Transportation will work with the city of Montreal, the Ministry of Social Services and community organizations like Diogène, Dialogue and EMIS, Bensadoun said.

When people heard the news that the eviction was on hold, they ran from tent to tent, sticking together and celebrating.

“If you look at their postures here today compared to yesterday, you can see a distinctive difference – there is an air of relief and definite celebration,” said David Chapman, executive director of the Resilience Montreal shelter.

People had been coming to Resilience Montreal daily since they received the eviction notice and had nowhere to go, Chapman said. He is skeptical of the city‘s ability to properly care for those who will be evicted from the encampment as no clear commitment has been made to move forward.

“Unfortunately there is still a strong sense of paternalism,” Chapman said. “The idea of ​​really listening to people and hearing what they need and actually responding in accordance with what they say is still surprisingly rare.”

With long waiting lists for social housing, overwhelmed shelters with strict rules around substance use and pets, an increase in homelessness and the approach of winter, people living under highway are already in “survival camp,” Resilience Montreal said in a statement. Release.

“[The MTQ] will definitely need a better plan,” said Chapman, who will consult with people living in the encampment on what they need to move forward.

The area under the freeway was turned into a construction site in mid-September and work on six main arteries of Route 136, which Bensadoun said “cannot be delayed”, is expected to continue until 2025.

“It is a site that belongs to the Ministry of Transport, so it is private property and a property that is not suitable for any type of habitation,” Bensadoun said.