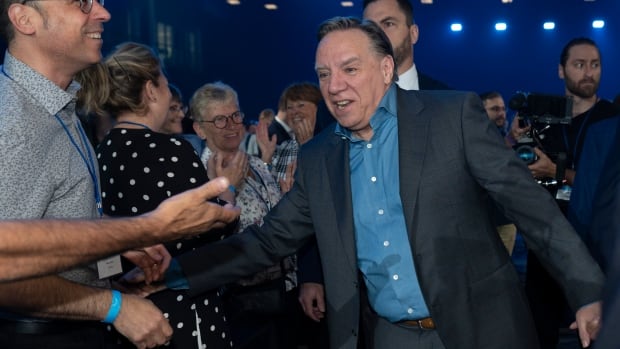 The Coalition Avenir Québec kicks off its national convention in Drummondville

This is the last big rally for the party before the provincial elections this fall.

Concrete barriers and fencing have been erected in certain areas around the Expo Centre, where the convention will take place, and only local traffic will be allowed on certain streets.

Caroline St-Hilaire, former Bloc Québécois MP and former mayor of Longueuil, will host the event. She will be a candidate for the Coalition Avenir Québec (CAQ) in the next election in the riding of Sherbrooke, seat of Québec solidaire MP Christine Labrie.

The theme of the convention is Quebec pride, with most CAQ resolutions dealing with national identity.

Of the 23 resolutions of the CAQ, the first listed are the creation of a national museum of Quebec to promote 400 years of history as well as the “contribution” of the First Nations and the creation of a compulsory contemporary Quebec history course for provincial colleges (CEGEPs).

Noticeably absent from the agenda, topics related to the pandemic, health care, labor shortages, the housing crisis, climate change or any other subject that may give rise to a controversial debate.

Asked about the lack of questionable resolutions to debate, Public Security Minister Geneviève Guilbault said Quebec pride is “as important as any other subject.”

“The Coalition Avenir Québec was created for many things but one of them is pride, to rekindle the pride of being Quebecois,” she said. “Not for sovereignty or for federalism… but a new form of nationalism, of pride in being Quebecers, and that is what this congress is about.”

Chantal Rouleau, Quebec’s junior transportation minister, said the party is still having debates with its members.

“You may not be invited to these discussions, but we are having discussions with members and citizens,” she told reporters. “That’s why we are able to act.”

Laws such as the Secularism Act and, more recently, Bill 96 – which overhauls Quebec’s Charter of the French Language – have drawn criticism both at home and abroad.

Simon Jolin-Barrette, the province’s justice minister, pushed back against criticism, saying the Quebec state will be “always free” to make its own decisions and implement strong measures to promote and protect French. .

“We don’t have to be judged by anyone because it is legitimate to defend the French language,” he said.

He added that he was not surprised that the English Montreal School Board pledged to challenge Bill 96 only two days after it was passed.

“We will be in court defending this law, even if it goes to the Supreme Court,” he said.

Four months before the October 3 election, a Léger poll conducted from May 20 to 22 and commissioned by Le Journal de Montréal and TVA puts the CAQ in a comfortable lead with 46% support.

According to the responses of 1,019 Quebecers, the Liberals, the Conservative Party of Quebec and Québec solidaire are trailing with the support of 18%, 14% and 13% of voters respectively.

Party leader François Legault is due to speak at the convention on Sunday.