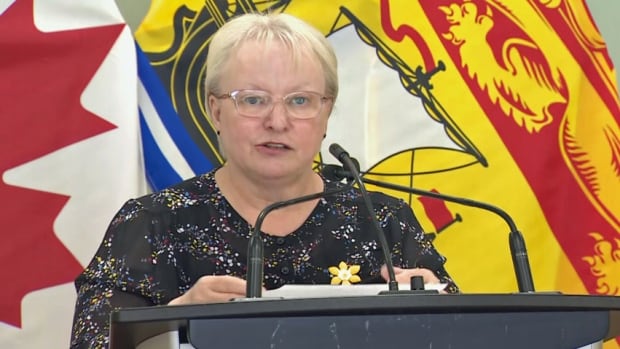 New Brunswick has detected its first suspected case of monkeypox, according to the provincial health minister.

Dorothy Shephard made passing mention of the suspected case of the disease when she answered a question in the Legislative Assembly from Opposition Leader Roger Melanson on Wednesday.

“Public health has been working with COVID for a few years,” Shephard said when Melanson was asked about a Statistics Canada report on the excess deaths seen in the province last year.

“We now have a suspected case of monkeypox in our province.”

Shephard did not provide more information about the suspected case of monkeypox during question period.

I don’t care too much about it at the moment.– Health Minister Dorothy Shephard

Speaking to reporters later, Shephard declined to share more details, adding that public health will if the case is confirmed by the National Microbiology Laboratory in Winnipeg.

“I’m going to let public health take the lead on this…and they, they have their protocols, and so until we get confirmation, we don’t think there’s any more information to release for the moment,” she said.

“Do I think it’s the same, you know, the same as COVID? No. So I like to deal with facts. I’m not, I’m not too concerned about that at the moment .”

In a statement on Wednesday evening, the Department of Health said the possible case was travel-related.

“Public Health has assured that the individual’s close contacts have been notified and said he has no reason to believe they transmitted the infection,” the department said.

The department said there were no confirmed cases yet and the public was not at risk.

Monkeypox is a rare disease that comes from the same family of viruses that causes smallpox, which the World Health Organization declared eradicated worldwide in 1980.

The disease usually does not spread easily between people and is transmitted by prolonged close contact.

According to the World Health Organization, monkeypox mainly occurs in West and Central Africa, but an outbreak of monkeypox is currently occurring in “many countries that generally do not have cases”.

Last Friday, Health Canada had detected 26 confirmed cases of the disease, including 25 in Quebec and one in Ontario.

“[Public Health Agency of Canada] collects and analyzes epidemiological information on reported cases to help define national scope and to determine if there are increased health risks to individuals in Canada,” Health Canada states on its website.

The agency says it is working with provinces, territories and international partners, including the WHO, to actively monitor the situation.

Canada’s National Microbiology Laboratory is performing diagnostic tests for the virus that causes monkeypox to better understand the chains of transmission occurring in Canada, the agency says.

These 12 hotels, spas and restaurants in Quebec have been named among the best in the world