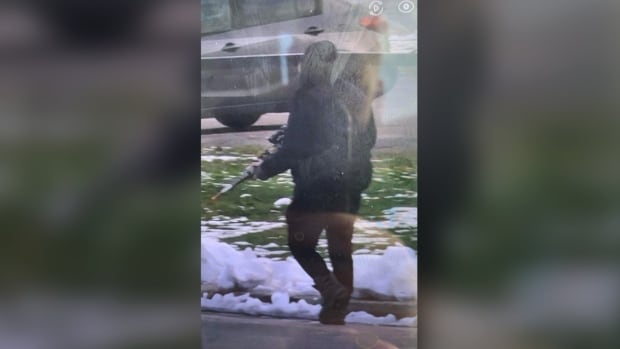 Quebec Provincial Police apprehended the suspect who was carrying what appeared to be a firearm around Sept-ÃŽles, Que., On Tuesday.

The police located the man in a building on rue RÃ©gnault shortly before noon. He is currently in police custody and will be questioned in the afternoon.

A spokesperson for the SÃ»retÃ© du QuÃ©bec, Hugues Beaulieu, said the suspect left the building alone and collaborated with the police.

Beaulieu said the weapon he was carrying appears to be a toy gun, but noted that some toy guns can still be considered weapons under the Criminal Code if they have certain characteristics.

No injuries were reported and Beaulieu said it was now safe for residents to leave their homes.

The local school board, Center de services scolaire du Fer, says it has canceled afternoon classes and is organizing transportation for students home.

Residents told to stay home during the police operation

Tuesday morning, the SQ received a photo taken by a resident of the suspect around 8 a.m., triggering a major police operation.

Provincial police have warned residents of the area around Perreault, NoÃ«l and Radisson avenues to stay home, lock their doors and stay away from windows.

Some schools in the area have been closed and some students have been detained.

The mayor of the city, Steeve BeauprÃ©, told Radio-Canada that he encouraged every citizen to stay at home and asked employers to put in place measures to ensure the safety of their employees, in particular by barricading their places. of work.

Quebec Health Minister Christian DubÃ© was due to make an announcement in Sept-ÃŽles at 11 a.m., but the event was canceled due to the incident.

Sept-ÃŽles is located approximately 640 kilometers northeast of Quebec, on the St. Lawrence.