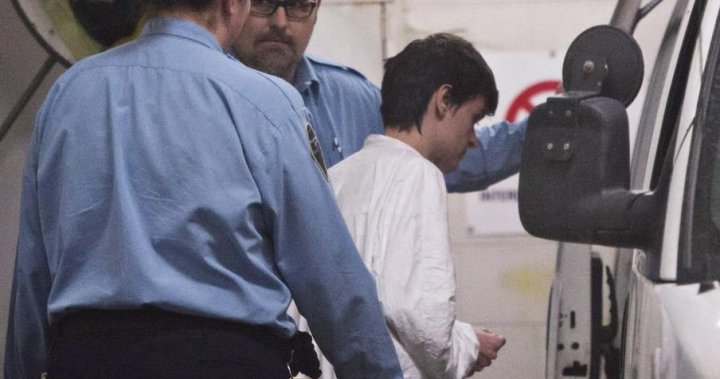 The Supreme Court of Canada is considering whether the gunman who killed six men during a rampage at a Quebec City mosque in 2017 can be sentenced to more than 25 years in prison without the possibility of parole.

Alexandre Bissonnette was initially sentenced to 40 years after pleading guilty to six counts of first-degree murder and six of attempted murder, but Quebec’s highest court reduced that sentence to 25 years on appeal.

Supreme Court Chief Justice Richard Wagner today questioned Quebec Crown Attorney Francois Gaudin on whether the consecutive sentences he is seeking amounted to a request for a death sentence for Bissonnette, since the killer would be 77 years old at the end of his prison sentence.

Gaudin argued that consecutive sentences totaling 50 years of parole ineligibility are the only way to reflect the gravity of Bissonnette’s crimes.

During Bissonnette’s 2019 sentencing, a Quebec Superior Court judge rewrote a 2011 federal law that gave courts the right to impose consecutive sentences in 25-year increments for multiple murders, saying the law amounted to cruel and unusual punishment.

The Court of Appeal agreed that the consecutive sentences violated the Charter, but ruled the lower court judge erred in awarding the killer a 40-year sentence and opted for 25 years instead.

1:55
The Muslim community of Quebec still heals 5 years after the shooting of a mosque