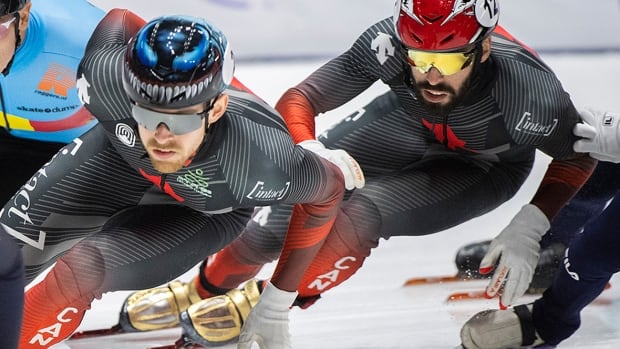 Steven Dubois, who won a silver medal in speed skating for Canada in the 1,500 meters at the Beijing Olympics in February, achieved the same result at the season-opening World Cup in short track on Saturday to Montreal.

Dubois, who was leading halfway through the A final, reached the finish line at the Maurice Richard Arena in two minutes 14.312 seconds behind South Korean Park Ji Won and 1-1000ths ahead of his teammate, Hong Kyung Hwan, in a photo-finish.

Montreal’s Pascal Dion fell and finished last among the six finishers in 2:54.242.

Two weeks ago, Dubois, of Terrebonne, Que., won the men’s national title for a third straight year at the Canadian championships in Quebec.

“He has great potential,” Dubois’ former relay teammate, retired Charles Hamelin, told Montreal newspaper La Presse. “He has exceptional athletic and skating qualities that I myself have never had in my life. If you combine these qualities with a certain confidence, forget it, the rest of the world will not find it funny!”

“When confidence kicks in and he goes in without fear, he’s going to be tough to beat.”

WATCH | Dubois wins the silver medal in the 1500 meters in photo-finish:

Terrebonne, Que. Native Steven Dubois finished with a time of 2:14.312 to narrowly claim silver in the men’s 1500 meters final at the ISU Short Track World Cup in Montreal.

Dubois, a triple medalist at the Beijing Winter Games, won silver in a penalty event in China as well as gold in the 5,000m relay and bronze in the 500m.

Dubois, 28, started skating at age 11 or 12, preferring speed skating to hockey because his parents didn’t like the atmosphere of hockey rinks.

A substitute with the 2018 Olympic team in Pyeongchang, South Korea, he finished fourth in the 1,500m at the 2019 world championships and the following year he took silver in a triple medal at the Four Continents Championships. to Montreal.

Elsewhere on Saturday, Canada won bronze in the 2,000-metre mixed relay, finishing just behind the Belgian team with a time of 2:41:066. South Korea won gold.

Despite a crash at the finish line, the Canadians clocked 2:41.066 to claim the bronze medal in the 2000-metre mixed relay final at the ISU Short Track World Cup in Montreal.

In the women’s 1,000, reigning three-time Canadian champion Kim Boutin finished fourth in her heat and qualified for the B final. The A final featured Doak, who fell and did not record a time.

Live streaming of the event on CBCSports.ca will continue Sunday at 1:30 p.m. ET.

For shorter coverage, see CBC Sports presents, our weekly program featuring the best high performance athletes from across Canada and around the world. Air the show Sunday at 4 p.m. ET