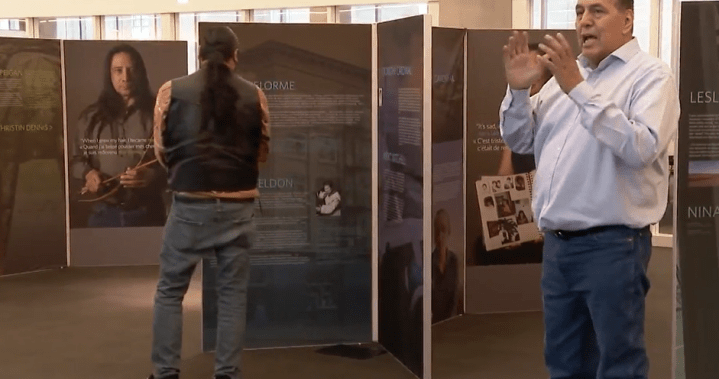 ‘Starting to Tell Our Truth’: Sixties Scoop Exhibit Comes to Vancouver from Alberta

Disclaimer: This story deals with a disturbing topic that may upset and trigger some readers. Discretion is advised.

A traveling exhibit focusing on truth and reconciliation has made its way from Alberta to the Vancouver Public Library. The exhibit, titled “Bi-Giwen: Coming Home — Truth Telling from the Sixties Scoop,” is an initiative of the Sixties Scoop Indigenous Society of Alberta.

It opened in Vancouver on Saturday and will remain until Tuesday, before being wrapped up for display elsewhere.

“The stories, memories and impacts of the Sixties Scoop are complex,” Sixties Scoop Indigenous Society of Alberta president and survivor Sandra Relling said at the launch.

“What is clear though is the pain, grief and loss that survivors have and continue to experience. This illustrates a strong need for healing for survivors. We begin to speak our truth.

‘We are invisible’: Amid residential school reckoning, BC Sixties Scoop survivors want action

The Sixties Scoop refers to a period between the 1950s and 1980s, after changes to the Indian Act allowed provincial governments to take over Indigenous child welfare. Thousands of First Nations, Inuit and Métis have been removed from their biological families, usually without consent, and placed in non-Indigenous homes.

They were stripped of their language and culture and left with complex questions about their identity, “feeling that they didn’t belong in either the Indigenous world or the non-Indigenous world,” Relling said. Many have faced extreme forms of physical, sexual, mental and spiritual abuse.

Bi-Giwen is the first exhibit of its kind in Canada, Relling added, featuring the oral testimonies of 12 roundup survivors. It also includes replica canvases from engagement sessions with survivors in Alberta leading up to the provincial government’s formal apology in 2018.

The originals are housed at the Royal Alberta Museum, where discussions about creating a permanent Sixties Scoop exhibit are currently underway.

1:34
Sixties Scoop lawyer Katherine Legrange on the need for a national inquiry

The launch in Vancouver brought together local survivors, elders, volunteers and politicians, as well as members of the Sixties Scoop Indigenous Society of Alberta. Staff were on hand to help visitors cope with the pain and re-emerging trauma.

Relling urged other guests who might feel “guilt and shame” browsing the exhibit to “channel” their emotions into action.

“Speak even if your voice is shaking. It is essential to our healing and our reconciliation,” she said.

“The most important thing you can do is acknowledge what happened, honor the survivor and make sure we all take action today to eliminate racist views by educating people about this story and its ongoing impacts.”

The Manitoba government apologized for its role in the Sixties Scoop in 2015. The Alberta government followed suit in 2018, and Saskatchewan Premier Scott Moe did the same in 2019 .

On Saturday, Sixties Scoop Indigenous Society of Alberta board member Adam North Peigan called on BC Premier John Horgan to do the same in the BC Legislative Assembly.

“That didn’t happen in British Columbia,” he lamented, pointing to politicians and reporters in the crowd.

“Everyone of you with influence…you need to encourage the BC government to apologize to make this a western Canadian movement.”

The Vancouver Public Library said Saturday it was pleased to host the exhibit as part of its commitment to decolonize public institutions in Canada.

The library regularly features Indigenous collections, authors, speakers, film screenings and workshops, and has an Indigenous storyteller in residence.

Speaking from his own personal experience studying for the Canadian citizenship test, Vancouver Public Library board member Abeer Yusuf said the Sixties Scoop is nowhere to be found in the guidebook.

“It’s pretty heartbreaking to me that it’s not acknowledged or mentioned anywhere, but it’s obviously a core part of our history and how we’ve become,” she said.

The Hope for Wellness Helpline offers culturally appropriate counseling and crisis intervention to all Indigenous people who are experiencing trauma, distress, strong emotions and painful memories. The line can be reached anytime toll-free at 1-855-242-3310.

The Government of Canada invests in life sciences by supporting MedXL