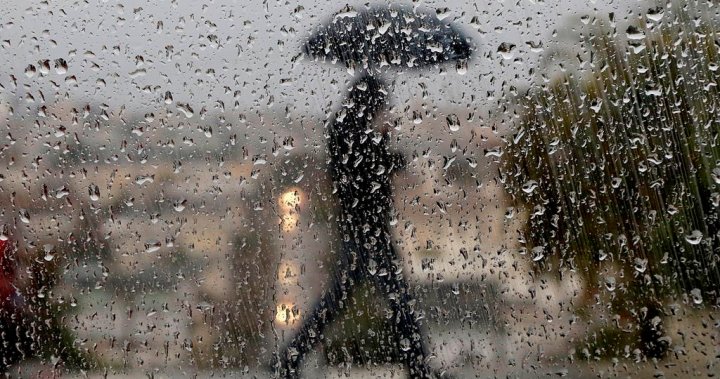 Round after round of thunderstorms in southern Quebec caused flooding and left thousands of homes in the dark Thursday.

Environment Canada reports that 41,000 Hydro-Quebec customers were without power at the height of the storm.

“The cuts are mainly caused by the contact of vegetation with the network following high winds,” the utility wrote on its website Thursday evening.

A disorderly mix of heavy rain and high winds swept through Montreal and several other areas for hours, beginning in the late afternoon and continuing well into the evening.

“Amounts of rain of 40 to 60 millimeters fell in less than three hours in the Greater Montreal area, causing flooding,” the weather agency said in a statement Friday.

In Montreal, the downpour caused flooding in some streets and highways. Rainwater also seeped into part of the city‘s subway system and temporarily disrupted service on the Blue Line.

Powerful thunderstorms also wreaked havoc on air travel. There were a slew of flight cancellations and delays at Trudeau Airport Thursday night.

Environment Canada had issued several warnings for areas in the southern half of the province, including tornado watches for some areas.

The weather event was so violent that houses were damaged in some areas, including the community of Sainte-Marthe-sur-le-Lac in Deux-Montagnes. The weather agency reports that lightning struck a residence and caused a fire.

The Sainte-Thérèse fire department said the damage was significant for two residences following the fire, but the situation was under control by early evening.

Is the Rouge et Or du Québec the best triathlon club in the country?

The Government of Canada invests in life sciences by supporting MedXL