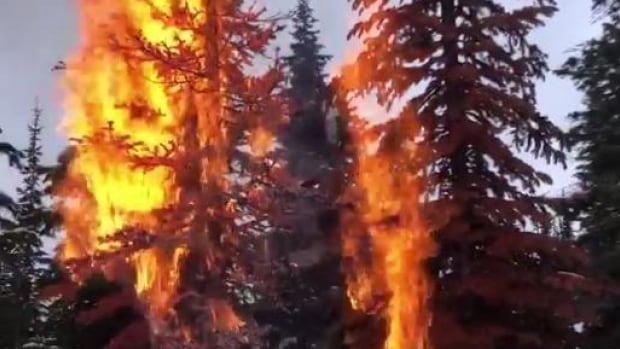 RCMP Trail Detachment, BC are investigating an eruption of “Kootenay candles” at the Red Mountain Resort in nearby Rossland.

The term “Kootenay candle” has come to refer to the practice of lighting old dead trees in the dead of winter, often using sap or sapwood to start the fire.

Because dead, dry wood is primarily used, fires regularly consume entire trees and soar 20 meters into the air, and can be seen from great distances.

Most often performed in the backcountry, the act has become a small part of outdoor recreation culture in British Columbia’s Kootenay region.

sergeant. Mike Wicentowich of the Trail RCMP says he is alarmed by the number of Kootenay candlelight reports his detachment is receiving.

“These were seen quite frequently on Red Mountain … as well as many other places in the Kootenays,” he said.

Wicentowich says wildlife depends on dead trees for their habitat, and burning them unnecessarily disrupts ecosystems.

The Kootenay Boundary Regional Fire Rescue adds that setting fire to dead trees in the winter can lead to wildfires in the spring and summer.

“If it’s hot enough and long enough, the fire can spread through the root system… Yes, it can,” said Glen Gallamore, deputy fire chief.

Gallamore says the fire can travel underground and remain active through the winter months, reappearing once more in the spring or summer when drier conditions present themselves.

He also says he has seen this type of fire break out, but that they are rare.

Experienced Kootenay backcountry users say Kootenay candles have been part of the region’s culture for a long time.

“People have been doing this since time immemorial here,” said Tyler Bradley, a snowboarder from Hills, B.C., who runs the Kootenay Backcountry Snowboarders’ Assembly Facebook page.

Bradley says he’s seen Kootenay candles every year since he moved to the area 16 years ago.

He says Kootenay candles can get rid of standing dead wood while the risk of creating large wildfires is low, but he disapproves of the practice because a friend once lit a Kootenay candle while he was nearby. , burning several holes in his Gore-Tex jacket.

“I thought an avalanche had started. When these things catch, it sounds like a really loud blasting noise,” he said.

Bradley urges backcountry users to avoid lighting burning trees except in an emergency.

“There is very rarely a practical reason to do so.”

Kootenay candles are not unique to Kootenays – they occur elsewhere in North America, where people congregate in the backcountry, although they are not always known by the same name.

He asks anyone with relevant information to contact Trail RCMP.