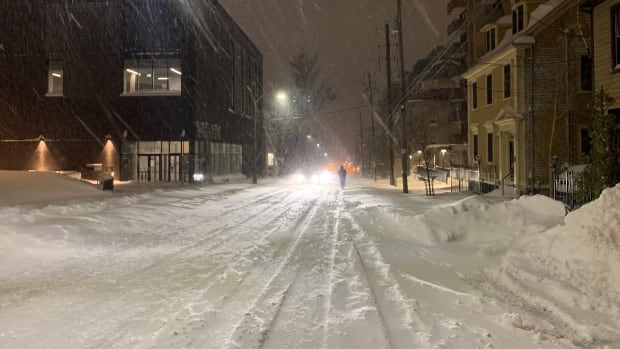 A snowstorm that blanketed Nova Scotia overnight closed schools across the province.

All the regional education centers as well as the Conseil scolaire acadien provincial have canceled classes for the day, and several universities have closed or delayed the opening this morning.

Many daycares, government offices and businesses are also closed or have delayed openings.

Snow began in the southwestern part of the province on Wednesday and spread eastward throughout the evening.

Strong northeast winds will blow over the snow creating poor visibility with the strongest winds expected in Cape Breton and the eastern continent.

The entire province, with the exception of Shelburne, Yarmouth and Digby counties, is subject to an Environment Canada winter storm warning or snowfall warning.

Several flights to and from Halifax Stanfield International Airport and JA Douglas McCurdy Airport in Sydney this morning were canceled and Marine Atlantic has postponed crossings between North Sydney and Port aux Basques, Newfoundland .

The municipality says it has worked with the province and community agencies and service providers to provide temporary emergency shelter to people living in homeless settlements.

An emergency shelter was opened overnight, providing comfort kits, a meal and a shower to those in need. The occupants of the refuge will be offered transportation to a comfort center, which will be open today from 9 a.m. to 9 p.m.

Search and rescue teams have visited known homeless camp sites to provide a route for people to comfort centers.

The garbage, recycling and green bin collections scheduled for today have been canceled and postponed to Saturday.

Many municipal recreation centers have delayed opening and registration for aquatic and skating programs has been delayed until 2 p.m.