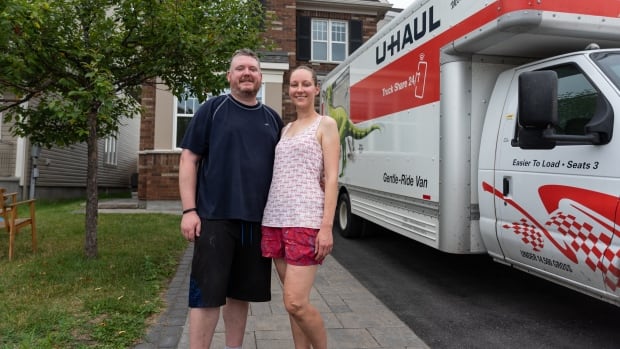 Sellers caught up in price cuts as housing market cools

An Ottawa family packs up their things and moves into what they hope will be their “forever home,” but they won’t take home as much money as they would have hoped to get from the sale of their first home.

“I know we didn’t ‘lose it’ because it wasn’t ours, right,” Natalie Hawkins said. “But not earning as much as the others earned three weeks earlier… that’s a lot of money to lose.”

To make ends meet, the family will rent a room upstairs in their new home.

As home prices plummet across the country, sellers must face the reality that sky-high sale prices are not guaranteed.

The Hawkins bought their four-bedroom, three-bathroom single-family home in Barrhaven in 2015 for $350,000.

They have since finished the basement, landscaped the backyard, installed a fence, deck, patio and stainless steel appliances.

Recently, they spotted a slightly larger home being built just up the street that had a two-car garage and a larger yard — perfect for the couple and their two young children.

“It felt like our forever home,” Natalie Hawkins said.

“And the way the market was, we could sell this house for maybe not too much difference to get to the price of the new house. That was our expectation.”

The Hawkins put down a $100,000 deposit and prepared to sell their first home.

They had seen their neighbor sell a mirror image model of the same house for $890,000 and were hoping to get a similar price for their own home.

But then the market conditions suddenly changed.

They considered keeping their first rental home, but securing an additional mortgage proved difficult. They hired a real estate agent as the value of their home continued to fall.

Although the family made a significant profit on their first home, they now face what they expect to see nearly a decade of additional mortgage payments to make up the difference in value between that home and the new one. .

Net downward trend across the country

For those watching the housing market closely, a correction was always in the cards.

“It was inevitable that we would see the pendulum swing back. And here we are.”

A look at the average national home price excluding the country’s two most expensive markets – Vancouver and the GTA – shows that the average home price in Canada is down $114,500 from June 2021.

The sales-to-new listings ratio was 51.7%, its lowest level since January 2015, indicating a fairly balanced balance between supply and demand.

Turner explains that a unique set of circumstances led to a temporary spike in home prices.

The COVID-19 pandemic has prompted people to cocoon at home and spurred interest in having bigger homes on bigger lots in the suburbs.

Combined with exceptionally low mortgage rates – some could briefly be obtained for less than 2% – and an influx of public funds via pandemic relief programs, this perfect storm sent prices up by 30 to 40%, Turner said.

He expects it will take several years for the housing market to rebound. He remembers the great real estate crash of the early 1990s.

“We are only halfway through” the current decline in house prices, he predicted.

Real estate agents, who have spent the past few years dealing with quick sales and submitting offers above the asking price, now have to explain to potential sellers that things have changed.

“For the average person who expected to get $700,000 (selling) a townhouse in the suburbs, that just isn’t the case anymore,” said Nicholas Crouch, broker at ReMax Hallmark Realty Group.

Crouch pointed to the number of days in the market as a key indicator of cooling conditions. That number has gone from just five days at the peak of the market to nearly 20 days now.

He adds that buyers now have time to shop around and submit offers with conditions, which they “have not seen in years”.

Robert Hawkins expected a market correction but said it came at a particularly bad time for the family.

Even after the setbacks they have endured, he keeps things in perspective.

“We’re very lucky to be in the position we’re in,” he said, adding that they couldn’t have afforded their new home without the accumulated equity in their first home.

Visit of Pope Francis to Canada: The Pope will leave Edmonton and travel to Quebec