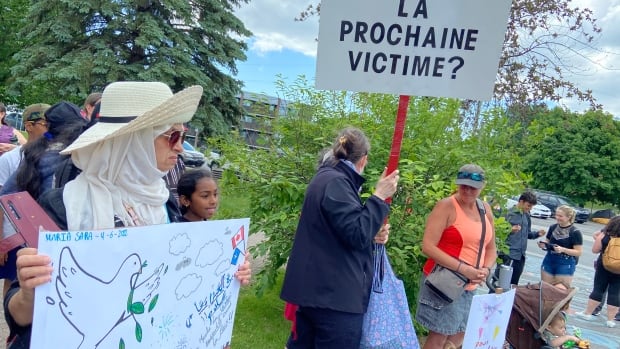 Residents and community organizations in Laval say urgent action must be taken to address rising gun violence this summer.

Many say they are shaken after Wednesday’s shooting at a restaurant in the city’s Vimont neighborhood that left a 42-year-old man dead. Last month, the city also saw three shootings in the space of three days.

“They are afraid of being in the wrong place at the wrong time,” said Dorvelus, who helped organize the protest outside the Raymond-Fortin community center on Saturday.

“I’m not just talking about children, but also young adults.”

Others worry that parents may not feel as safe bringing their children to community centers in some areas. A few weeks ago, gunshots were heard near the Raymond-Fortin community center, just down the street from an elementary school, says Lucie Lanthier.

“It’s worrying,” said Lanthier, who works as a managing director with Recreation Renaud Coursol. The community center operates out of the building and also runs a day camp.

“All the shots that were fired here a few weeks ago were about 10 minutes before the bell rang at primary school,” she said.

Josée Beaudet says she no longer feels safe in her neighborhood after hearing gunshots a few steps from her home.

“The shooting happened right outside my house,” she said. “I don’t feel safe. For me, for my daughter.”

Saul Polo, the Liberal MP for Laval-des-Rapides, was in attendance Saturday and said the province had neglected to fund organizations in Laval that work hard to keep young people out of trouble.

Last fall, Quebec Public Safety Minister Geneviève Guilbault committed more than $90 million in funding to crack down on gun traffickers and curb a recent trend of gun violence in the province. . It’s a good first step, but policing only goes so far, Polo said.

“The government has announced a few amounts of money to further support law enforcement in our city and in different cities in Quebec, but what we are also asking is that every dollar invested in security be also invested in the support of our community groups who work with young people, and who work specifically on prevention,” said Polo.

The $90 million investment includes the creation of a pan-Quebec operation called CENTAUR, a coalition of more than 20 police forces in the province. It was created in hopes of strengthening units in the province that already investigate gun violence and improving collaboration between police forces.

On Wednesday, provincial police reported that a recent investigation in the Montreal and South Shore region, including Delson, Saint-Amable, Longueuil, had led to the seizure of six handguns, two long guns and more. $50,000 in cash.

Four men, all aged 27, were arrested in connection with the seizure and appeared in court in Longueuil on various firearms charges, the Sûreté du Québec (SQ) said.