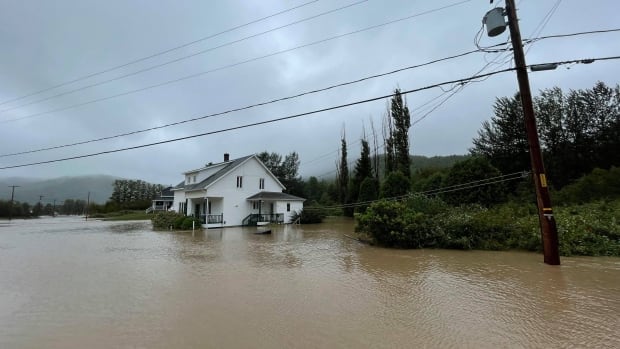 The municipality of Grande-VallÃ©e, in GaspÃ©sie, is in a local state of emergency following severe flooding in the region due to the remains of Hurricane Ida, said the mayor of the village.

Environment Canada forecast more than 100 millimeters of rain in the GaspÃ© region on Friday with warnings of storm surges, rain and wind in other regions of eastern Quebec.

Evacuations and displacements are underway in Grande-VallÃ©e, in particular in the streets bordering the river of the same name. Water levels have risen dramatically due to the heavy rains, inundating several waterfront properties.

At least 12 families have been displaced and the village retirement home has been evacuated as a preventive measure.

“Currently, the municipality is in emergency mode due to heavy rains following the passage of the remains of Hurricane Ida,” said the mayor of Grande-VallÃ©e NoÃ«l Richard in a Facebook post.

“We are currently working to ensure the safety of affected citizens and have been evacuating residents since early this morning.”

The municipality called on the Civil Security and the SÃ»retÃ© du QuÃ©bec to coordinate emergency measures. The village uses a community hall to help those affected by the floodwaters, and at least 25 residents have taken refuge there.

Richard advised residents to stay at home, as the level of the Grande VallÃ©e River and the water in the streets nearby are “extreme.”

Between 50 and 100 millimeters of rain fell on the GaspÃ© Peninsula, raising the level of the river, according to Environment Canada. However, the situation should improve during the day and the water should gradually recede.

“Precipitation should stop during the afternoon for areas where it is still raining,” said Maxime Desharnais, meteorologist at the Federal Meteorological Agency.

“We are starting to see the light at the end of the tunnel with the remains of Hurricane Ida.”

In Quebec, no party has an easy road to victory