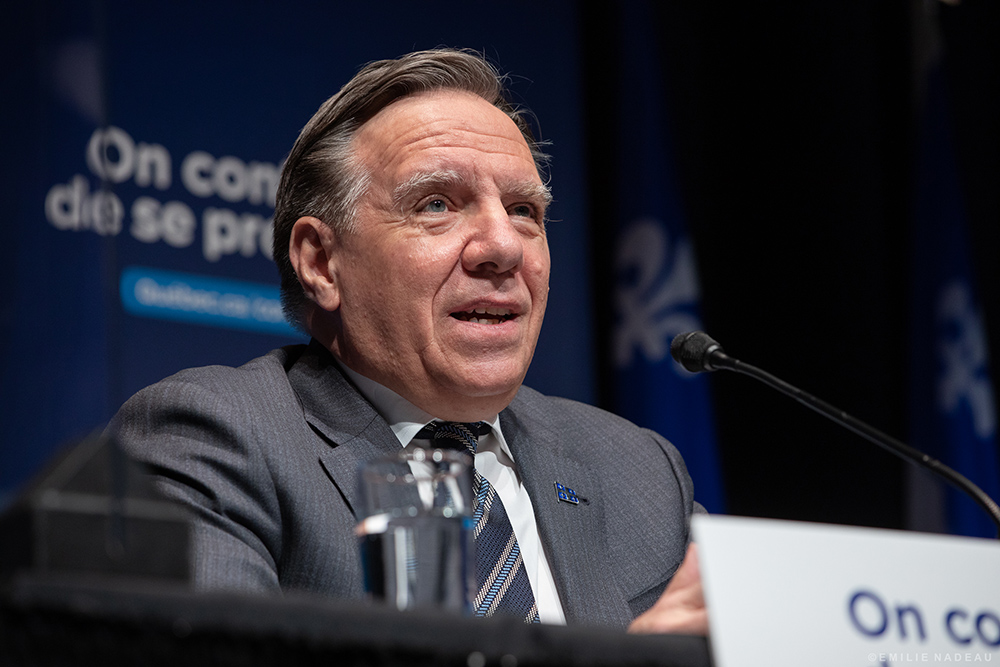 For years, Conservative politicians in Alberta have used Quebec as a punch bag for their populist pimping. Last week, just a day after Jason Kenney’s long-running campaign against Quebec’s place in the federation culminated in a referendum on equalization, the punching bag finally hit back.

In a speech delivered to the National Assembly of Quebec, Prime Minister FranÃ§ois Legault announced that “the government has decided to definitively renounce the extraction of hydrocarbons on its territory”. It’s hard not to see the timing of this announcement as a rebuke of Alberta’s equalization campaign and the anti-Quebec rhetoric that it was so visibly marred.

Environmental activists quickly announced Legault’s decision to ban the development of fossil fuels in Quebec as a major breakthrough in the fight against climate change.

Our award-winning journalists bring you the news that touches you, Canada and the world. Don’t miss out.

Caroline Brouillette, National Director of Climate Policy, Climate Action Network Canada, noted it was â€œthe result of YEARS of organization and a signal to other provinces, Canada and the rest of the worldâ€. Catherine Abreu, founder and director of Destination Zero, also decided the decision deserved a response in all caps. “It’s HUGE”, she tweeted.

But is it really? Quebec, after all, has never produced significant volumes of oil or gas, and it has been clear for some time that it never will. Yes, they have reserves in the ground and could theoretically develop them, but Quebec has shown no desire to do so until now. He has already indicated that he is prepared to go to court to push back lawsuits against the owners of the oil and gas licenses he has granted, at a potential cost ranging from $ 500 million to $ 3 billion. His pledge to continue not to produce oil and gas is therefore a bit like a longtime vegetarian who publicly swears not to smoke bacon.

My colleague Chris Hatch maintains that it is not quite the nothingness that I claim to be. â€œQuebec is effectively taking a position here and leaving money on the table, â€he wrote. “Unlike British Columbia, the government has already rejected proposals for a liquefied natural gas industry.”

What people are reading

Hatch writes that “Quebec joins a growing list of governments that are avoiding the development of fossil fuels,” and includes the names of Denmark, Spain, France, Greenland, Ireland, Belize and from Costa Rica. But that list represented less than 280,000 barrels of production per day in 2020, which is a rounding error on a rounding error in a world market of nearly 100 million barrels per day.

California, which Hatch also mentions, has proposed a ban on new oil drilling within 3,200 feet of schools, homes and hospitals, a move that will surely accelerate the decline in its decades-long oil production. But California will still produce oil for many years to come, notwithstanding Gavin Newsom’s promises.

This is not to say that these kinds of political commitments have no value in the global fight against climate change. But it’s important to remember where this fight is actually taking place and how these performative announcements might play out on this battlefield.

Andrew Leach, a professor at the University of Alberta who chaired his province’s climate change advisory group in 2015-16, warned of the potential implications of Quebec’s announcement in his own province.

Opinion: Quebec’s pledge to continue not to produce oil and gas is a bit like a longtime vegetarian who publicly swears not to smoke bacon, writes columnist @maxfawcett.

â€œWhen it comes to climate change, we have spent three decades with commitments to maintain the status quo, presented as progress and used to shame jurisdictions trying to make difficult choices and / or present their efforts as meaningless or insignificant. insufficient, â€he said. tweeted. “It’s frustrating as hell.”

It is also dangerous.

The victory climate activists claim in Quebec could easily turn out to be Pyrrhic, given the obvious risk of backlash in Alberta – and potentially Ottawa.

The most significant climate change has to happen in the West, and it takes some level of public support for it to happen. Giving an increasingly desperate populist prime minister a live political grenade is likely to result in a lot of unnecessary collateral damage – and no meaningful progress on the war on climate change.

This is where the Prime Minister must step in. Legault clearly has no interest in protecting Canada’s national unity or advancing its common climate goals, and Kenney is not far behind him. Justin Trudeau, on the other hand, should have these two points high on his political agenda. And while Legault and Kenney would be happy to set the country ablaze if it helped them get re-elected in their own province, Trudeau has a responsibility to put out those kinds of fires.

That is why, when it comes to the results of the Alberta equalization referendum, which saw a 58% â€œyesâ€ on the government’s anti-equalization issue, the Prime Minister must be cautious. No, they’re not forcing him to surrender to Alberta, and they certainly won’t give Kenney anything as leverage. After all, less over 25 percent of eligible Albertans actually supported the government’s position, which is in line with the UCP’s current view.

But if Trudeau is to keep his climate plans and promises, he can’t afford Alberta to pull hard the other way. It is even more likely now that he has appointed Steven Guilbeault, a longtime Quebec environmentalist, as the new Minister of Environment and Climate Change.

That means he has to expose Kenney’s bluff here and provide additional federal dollars to Alberta in areas where it probably doesn’t want to spend it. Perhaps this is additional financial support for cleaning up abandoned wells, and perhaps dedicated funding for the development of new low-carbon energy sources. Either way, by giving Alberta a superficial victory over tax reform and equalization, it can help avoid a much bigger loss on the climate.