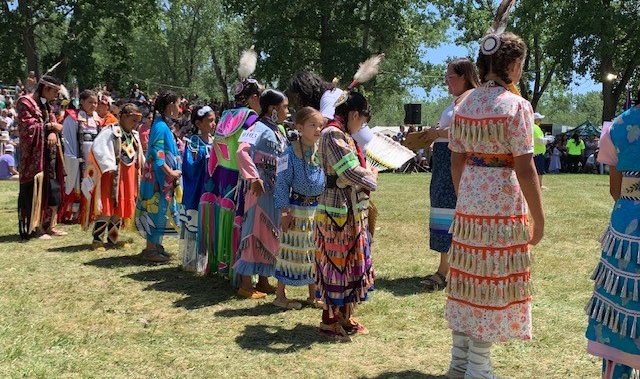 The Echoes of a Proud Nation powwow returned to Kahnawake over the weekend.

It is the largest pow-wow in Quebec and brings together thousands of people from different regions. It was first held in 1991, a year after the Oka Crisis, the infamous confrontation between Mohawk protesters and the Canadian military.

The event has been held every year since and serves to bring people together from all surrounding areas to renew relationships.

Grand Chief of the Mohawk Council of Kahnawá:ke, Sky Deer, said it was important for those who do not live in the community to come and learn more about Indigenous people.

“All the land around us is still our land and if they are to live on our land, it is important that they know our people, our culture, our habits,” she said.

The Kahnawake Pow-Wow is back! pic.twitter.com/0lBRN6N9Wm

The powwow is a major tourist attraction for the area and normally draws around 8,000 people each year.

“It’s an event that a lot of us in the community are looking forward to, we’re seeing a lot of faces that we haven’t seen,” Deer added.

Spectators can enjoy many traditional dances, including a contest, songs, and costumes, but they can also try different types of food, shop at a variety of kiosks, and talk to people in the community.

“Only suitable”: an indigenous priest in charge of the liturgy for the visit of the pope

The highlight of the event is the grand entrance parade of dancers, but for many in Kahnawá:ke, the powwow is a matter of pride.

“They say every day is a proud day to be Native, but there’s just something about the powwow that makes it stand out even more,” Deer said.