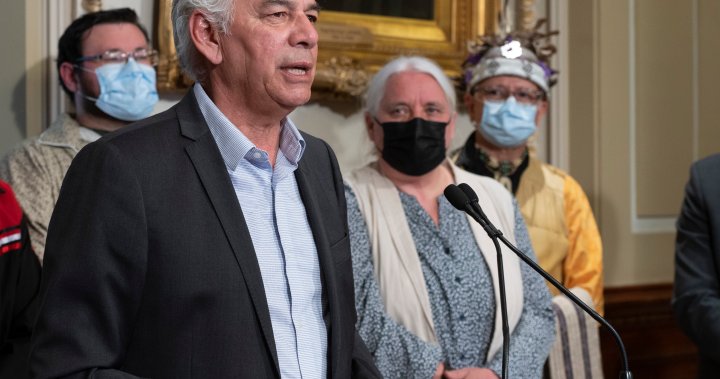 Indigenous leaders have spoken out amid the impending passage of the Quebec government’s controversial language bill aimed at protecting the French language.

The chief of the Assembly of First Nations of Quebec and Labrador said reasonable amendments to Bill 96 had been presented by the communities to legislators in the provincial legislature, but to no avail.

“Even when we play by their rules, we become the victims because none of this is recognized, accepted,” Ghislain Picard told reporters on Tuesday.

“With the results we have today, we have a bill that is being rushed in without any consideration for the rights of Indigenous peoples.”

Indigenous leaders in Quebec call for exemption from Bill 96

Bill 96 would impose stricter language requirements in the province, including in the education and business sectors. The sweeping reform aims to bolster the historic Charter of the French Language known as Bill 101, which was first passed in 1977.

While the new language law is expected to be passed before the National Assembly recesses for the summer, Indigenous leaders say their concerns have been largely ignored by the Quebec government.

Kahnawake Grand Chief Kahsennenhawe Sky-Deer explained that Bill 96 is far-reaching and that it is “not just an issue that affects Aboriginal youth when it comes to education.”

“The more we look at this bill, the more it will impact all areas of our lives as Indigenous people,” she said.

The bill in its current form goes against the “nation-to-nation” relationship that Sky-Deer wants with Quebec.

2:12
Indigenous leaders in Quebec call for exemption from Bill 96

Indigenous leaders in Quebec call for exemption from Bill 96

“The way this government is behaving is very dismissive and ignoring us and our long history and our presence in these lands,” she said.

The chief of Gesgapegiag, a First Nations reserve on the south shore of the Gaspé, also felt that his community’s concerns were not being heard. John Martin said the Quebec government should listen.

“They totally ignored everything we offered,” Martin said.

Speaking in the provincial legislature, the group reiterated its demand that Indigenous communities be exempted from Bill 96.

They also want to have a meeting with Simon Jolin-Barrette, the minister responsible for the French language who tabled the reform.

Aboriginal leaders have been invited to the Legislative Assembly of Quebec by the opposition Liberals and Quebec solidaire. While the Liberals have said they want to vote against the bill, the deputies of Québec solidaire intend to vote for it.

One of the main sticking points over the proposed law is that students at English-language junior colleges in Quebec – called cégeps – would have to take up to three additional French courses.

The controversial measure initially required those students to take three curriculum-related courses in French to graduate. After an outcry, the amendment was changed to replace them with three French language classes.

“If our communities are going to be able to thrive, education is key,” Martin said at the press conference.

Jolin-Barrette, for her part, said she heard the concerns of Indigenous communities – but explained that CEGEP students who choose to study in English will have to comply with Bill 96 if it passes.

— with files from Elizabeth Zogalis, Annabelle Olivier and The Canadian Press of Global

The Government of Canada is accelerating the transition to Industry 4.0 by supporting Lignum Veneer