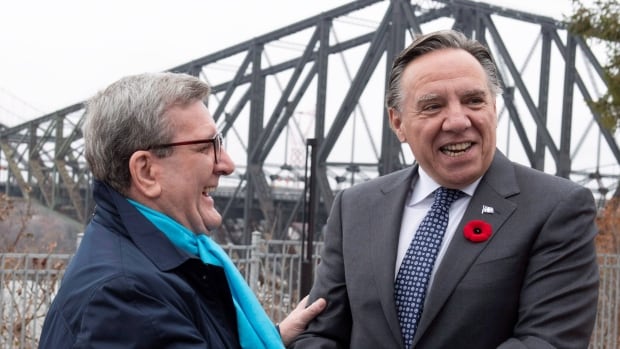 Recent demographic projections from the Quebec Institute of Statistics suggest that the third link project proposed by the Legault government — two underwater tunnels that would connect Quebec and Lévis across the St. Lawrence — may not be justified.

Throughout the election campaign, François Legault, the leader of the Coalition Avenir Québec, argued that the project was necessary to reduce traffic congestion and to keep up with the region’s population growth.

He also refused to release the feasibility studies, saying the information is outdated and inaccurate.

But data obtained by Radio-Canada show that the number of Lévis residents aged 20 to 64 should decrease by about 600 people by the time the tunnels are built in 10 years. This segment of the population is the most active in the labor market and the most likely to commute.

In comparison, the number of Lévisiens aged 65 and over should increase by approximately 14,700 people during this same period and by nearly 20,200 people in 20 years.

Longer-term projections suggest an increase of about 1,700 working adults living in Lévis by 2041, but some experts say that still doesn’t justify the need for a tunnel.

“We know that the movements are from the south shore to the north shore,” she said. “The number of additional citizens who will have to make this move will be marginal.”

About 36% of Lévisiens work in Quebec, compared to only 3% in the other direction. This is why the third link project is often considered more critical for the inhabitants of the South Shore.

The overall population of Quebec City is expected to increase by approximately 81,400 people by 2041, but most of this growth will be in people aged 65 and over.

Earlier data from 2019 also predicted minimal growth among working adults in the region.

Frederic Fleury-Payeur, a statistician at the Quebec Institute of Statistics, said population projections are generally quite reliable.

But current trends may change, Fleury-Payeur warned. For example, the composition of the active workforce could be different in 20 years.

“If older people are working, it could generate more workers,” he said.

A chicken and egg situation

It’s also a bit of a chicken and egg situation, explained Tremblay-Racicot. A third link would affect people’s decisions about where to live.

“If you improve travel conditions between Quebec and Lévis, more people will come to settle on the South Shore,” she said.

But road conditions would eventually deteriorate as more people drove, she said. She said what the area needed was better public transport.

The Legault government last proposal for the third link, which was unveiled last April, provides two lanes reserved for buses during peak hours.

The CBC asked the CAQ candidate for Lévis for comment, but did not hear back in time for publication.