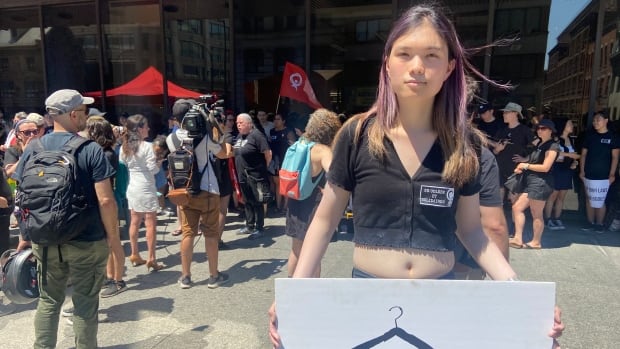 Protesters at a Montreal abortion rights rally in solidarity with Americans following the overturning of Roe v. Wade by the United States Supreme Court say they fear the decision will lead to a rise in anti-abortion sentiment in Quebec and the rest of Canada.

Hundreds of Quebecers of all ages gathered outside the Montreal courthouse on Sunday afternoon in the sweltering heat, carrying signs reading: “Solidarity and rage”, “My body, my choice” and “Access to abortion is a human right”.

Law student Celeste Trianon, who addressed the crowd at the protest, called the decision “one of the darkest days for feminism” in an interview with CBC.

“Our bodily autonomy as women, queer, trans and non-binary people is under threat,” Trianon said, adding that they have already noticed a galvanization among far-right anti-abortion movements in Canada.

“We’re lucky to have a society right now that’s generally accepting of abortion…but I’m very afraid it could go back.”

Rosalie Chrétien handed out popsicles at the protest and carried a black and white sign depicting a crying face.

“That’s just how I reacted when I heard the news on Friday,” Chretien said. “I’m an illustrator, so I try to convey feelings and emotions through visuals.”

The rally and others like it were organized by the Quebec Federation for Family Planningwho called on people across the province to demonstrate outside their local courthouse or city hall today at noon and arrive dressed in black.

“We are here first and foremost in solidarity with our American counterparts, who are forced to carry unwanted pregnancies to term,” said the co-director of the federation, Jess Legault.

But Legault said it was also important to show that such setbacks would not be greeted by idleness.

“The anti-choice movement in Quebec sees this as a victory, and we want to be very clear that we will not sit idly by,” she said.

Residents of Montreal‘s Plateau neighborhood received graphic anti-abortion flyers in their mailboxes over the weekend. Similar flyers have been distributed in other Canadian cities in recent weeks as city councils seek to block their distribution.

Montreal Councilor Marie Plourded tweeted that she also received one of the flyers and said she was “outraged”.

Several Quebec politicians have spoken out against the decision in the United States, denouncing the sudden reversal of the 50-year-old decision that had enshrined abortion as a right in the country.

Manon Massé, co-spokesperson for Quebec solidaire, was present at the protest and called on the provincial government to study and improve access to abortion in Quebec, where most clinics are located in urban areas.

Massé said Quebec must show solidarity with Americans and open its doors to those who need abortions.

“It’s the vulnerable women who are going to lose access,” she said.

“As feminists, we must continue to do our work, so that these things do not happen.… The women of Quebec and Canada must be aware that our rights are very fragile. They can be rolled back at any time.

Other politicians expressed their dismay on social media.

“I am outraged by the overturning of the Roe v. Wade decision, and in solidarity with all American women whose right to their own bodies is violated,” Montreal Mayor Valérie Plante wrote on Twitter on Friday.

“This decision is an unacceptable setback. Let us denounce it with force and vigor, here and elsewhere.”

Quebec Liberal Leader Dominique Anglade wrote that it was “a dark day for women and their rights and freedoms.”

“We must continue to fight so that our daughters always have more rights than us, not less,” added Anglade.

Charest said that in Quebec, “we will never allow this right to be questioned.”