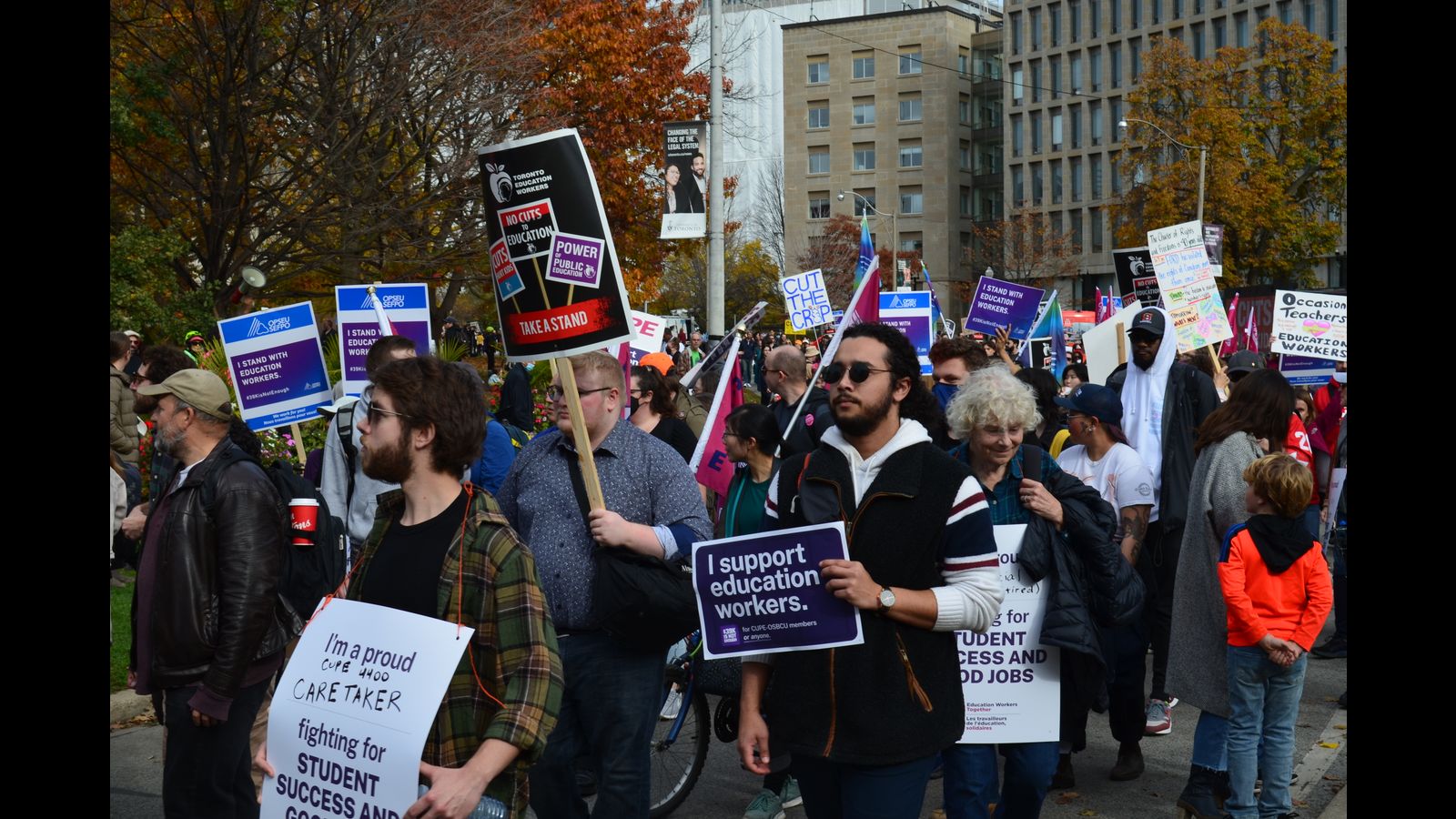 Quebec unions and the struggle of Ontario education workers: How bureaucracy sows disunity

Fifty-five thousand school support workers in Ontario defied an anti-wildcat strike bill imposed by the provincial Progressive Conservative government led by Doug Ford on November 4-7. Using the anti-democratic “notwithstanding clause” which allows governments to violate rights “guaranteed” by the Canadian Charter of Rights and Freedoms, Ford deprived support workers of their right to strike and imposed by government decree ” collective agreements” which included massive wage cuts in real terms and other concessions.

The courageous stand taken by Ontario support workers shows the way forward for workers across Canada who are facing the same attacks from big business and government on their wages, their working conditions, their right to collective struggle and public services. The support workers’ defiance galvanized mass support from the working class in Ontario and beyond, sparking a nascent movement for a province-wide general strike.

It is precisely to avoid such a scenario, which would have threatened the very survival of Ford’s far-right government, that the senior leaders of the Canadian Union of Public Employees (CUPE), the Canadian Labor Congress (CLC), Unifor, the Ontario Federation of Labor and construction unions began secret talks with the government to quickly end what they called a “political protest”. In exchange, Ford agreed to drop its use of the notwithstanding clause and repeal its draconian anti-strike legislation, Bill 28.

By ordering support workers to end their strike, without even bothering to consult with the rank and file, the union bureaucracy threw Ford a lifeline, quelling the growing rebellion among Ontario workers, including among dozens of thousands of teachers angered by their unions’ insistence that they take no “illegal” professional action.

However, the outcome of the education workers’ struggle is far from certain. By defying the strike ban despite possible fines of $4,000 per strike day, support workers took a stand for the entire working class. These janitors, teacher’s aides, early childhood educators, school bus drivers, librarians and administrative workers earn an average of less than $39,000 a year. They face an increasing workload due to decades of education cuts and the Ontario government’s disastrous response to the COVID-19 pandemic, which, like everywhere else in Canada, has taken profits before life.

This deterioration in social conditions, compounded by runaway inflation of around 7% (and much higher for basic necessities), is repeated across the country and in all sectors of the economy. This includes Quebec, the second most populous province after and adjacent to Ontario. A unified struggle of English-speaking workers in Ontario and French-speaking workers in Quebec, based on their common class interests and overcoming artificial linguistic divisions, would have a powerful impact across the country.

Any prospect of such class solidarity is viscerally opposed by the union apparatuses, both in Quebec and in English Canada. The unions thus continue the role they have played for decades in isolating and sabotaging workers’ struggles, especially when they pose a potential challenge to the existing capitalist political and social order.

Fifty years ago, as a spontaneous province-wide general strike sparked by the jailing of union leaders who sanctioned an “illegal” public sector strike rocked Quebec, Canada’s main labor federation, the CLC denounced it as a threat to public order. Ten years ago, as the powerful student strike of 2012 in Quebec threatened to spill over into the working class, the NPD (the social democratic party in the federal parliament supported by English Canadian unions) refused to support even verbally striking students over university tuition falls under provincial jurisdiction. As for Quebec union leaders, they explicitly forbid their English-Canadian counterparts from providing any support to the students on strike, in the name of Quebec’s “right to self-determination”.

Unions in Quebec, which collectively have more than a million members, barely mentioned the struggle of school support workers in Ontario. While it had been clear for months that education workers were headed for a decisive confrontation with the Ford government and that the latter was preparing to preventively criminalize any strike, Quebec unions waited until early November to publish tentative statements about Ontario’s support for the workers’ struggle on their websites.

Unsurprisingly, these releases contained no call to mobilize and join the ongoing struggle in Ontario. While they lamented Ford’s anti-strike legislation, they failed to point out the obvious fact that workers in both provinces are facing similar attacks and that governments across Canada, including those led by the Parti Québécois (PQ) backed by unions, have regularly enacted strike-breaking laws for decades.

Like their fellow bureaucrats in Ontario, the primary concern of Quebec union leaders is to obtain “negotiated settlements” in order to preserve what they call their “place at the bargaining table”, that is to say a key role in the anti-worker struggle. a “collective bargaining” system that guarantees union bureaucrats comfortable careers and six-figure salaries.

As Ontario workers prepared to challenge Bill 28, a Quebec educator and supporter of the Ontario Education Workers Rank-And-File Committee (OEWRFC), which is fighting to rally the working class to the fight of support workers school, had a revealing exchange on Twitter with the leaders of one of the three main labor federations in Quebec. He asked Éric Gingras, president of the CSQ (Quebec Trade Union Federation – Quebec Trade Union Federation), why the CSQ did not mobilize its members, including school staff, in support of Ontario workers?

In the language of union bureaucrats, always keen to blame the workers for their inaction and betrayals, Gingras replied that a “strike would be illegal” and that the workers would abstain. What he omitted to mention was that if workers in Quebec knew little or nothing about the strike in Ontario, it was because the unions had failed in their elementary duty to inform them; and that the central issues of the Ontario workers’ struggle – the opposition to austerity and the defense of the right to strike – are of paramount importance for all workers in Quebec.

In their efforts to isolate the militant struggle of Ontario’s education support workers, Quebec’s union bureaucrats can count on the complicity of the supposedly “left” party in the National Assembly, Québec Solidaire (QS).

This affluent middle class party is a promoter of Quebec separatist nationalism. He pays no attention to the fate of the workers of English Canada, and hardly any more to the workers’ struggles in Quebec. And when he does refer to such struggles, it is invariably in order to strengthen the union apparatuses that for decades have stifled workers’ opposition to social spending cuts, contract concessions and anti-strike laws. ’emergency.

Québec Solidaire’s contempt for the struggle of Ontario’s education workers is little different from the response of more traditional and openly right-wing sections of the Quebec political establishment, particularly its camp allies. pro-Quebec sovereigntist, many of whom openly sided with Ford.

Alain Therrien, a member of the Parti Québécois’ federal sister party, the Bloc Québécois, said he was “indifferent” to what is happening in Ontario. As for the mainstream right-wing nationalist media like The duty, which is close to separatist circles or The Journal of Montrealthe tabloid of billionaire CEO and former PQ leader Pierre-Karl Péladeau, they clearly displayed their hostility towards the Ontario strikers.

Antoine Robitaille of the Montreal Journal applauded Ford’s now-repealed scab law, including its use of the “notwithstanding clause”, on the grounds that it was intended to keep children in school and challenged the view that the right to strike should be considered a “fundamental” right, protected by the Constitution right.

Columnist Mathieu-Bock Côté, an outspoken nationalist who recently defended Italy’s fascist new prime minister, framed the Ontario labor dispute in entirely legalistic terms, saying the only significant issue was Ford’s use of the derogation clause and an alleged struggle between “the will of the elected” and the will of the judges. He wholeheartedly sided with the former, in support of the autocratic principle that governments should have the power to abrogate basic democratic rights.

Since the election of “Quebec first”, nationalist-autonomist CAQ in 2018, Quebec nationalists have again taken a turn to the right. They defended the Legault government’s use of the notwithstanding clause to shield its chauvinistic laws, Bills 21 and 96, from constitutional challenges. While these laws violate the democratic rights of minorities, Quebec nationalists present them as the expression of the “collective interests” of the Quebec “nation”. This political-fiction serves to mask the fundamental class divisions that run through capitalist society, in Quebec as in English Canada and in the rest of the world.

Quebec nationalism has nothing progressive to offer workers. This reactionary ideology serves the interests of the capitalist class by dividing the working class along linguistic and ethnic lines, thus blocking a common struggle of French-speaking, English-speaking and immigrant workers in Canada, in unity with their class brothers and sisters in the United States. United and overseas, against capitalist austerity and imperialist war.