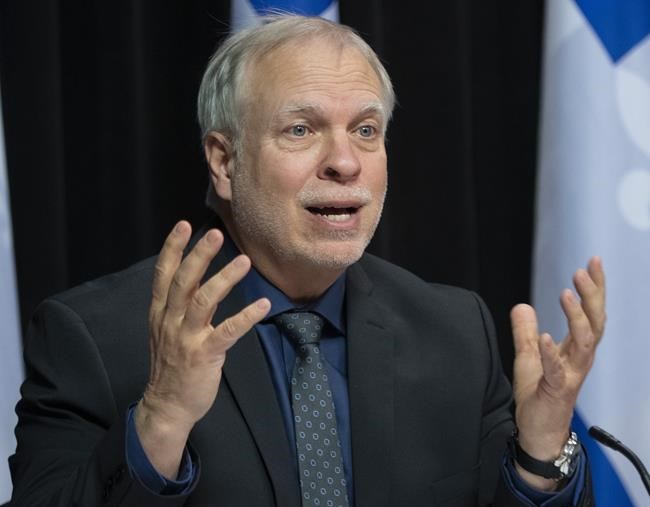 MONTREAL — Quebec’s acting director of public health said he has no plans to recommend new COVID-19 restrictions amid rising indicators, but on Sunday warned the public to to be cautious about the increase in cases. dr.

MONTREAL — Quebec’s acting director of public health said he has no plans to recommend new COVID-19 restrictions amid rising indicators, but on Sunday warned the public to to be cautious about the increase in cases.

Dr. Luc Boileau told a press conference as authorities expected an increase due to the lifting of most COVID-19 restrictions just over two weeks ago, but the Experts are closely watching several indicators that seem to point to an upsurge in the spread.

Boileau said that in addition to an increase in cases and the positivity rate of analyzed PCR tests limited to certain high-risk groups, health authorities have also noted an increase in hospitalizations in several areas outside the region. from Montreal.

Authorities are also concerned about a 60% increase in the number of health care workers sidelined due to COVID-19 in less than a week, with around 8,600 workers currently out of work. . By comparison, during the Omicron wave in December and January, between 16,000 and 20,000 health workers were absent, Boileau said.

“We are not officially in a sixth wave,” Boileau told reporters, adding that it will take several days of additional data to be certain.

The increase was more pronounced due to the more contagious BA.2 subvariant in the province, which now accounts for two-thirds of positive cases, up from 57% a week ago.

Boileau said that due to good vaccination coverage, the reach of the Omicron wave that affected about three million Quebecers earlier this year, experts told the Ministry of Health that the current expected increase in cases could reach about half of what was reported in January.

Boileau said that even if there was an increase in cases, he is confident that Quebecers can adapt accordingly without stricter measures. Quebec has promised that mask requirements, the only remaining measure, will be lifted by mid-April for public spaces and by May for public transport and Boileau said that remained the plan.

“It’s normal to have waves for these kinds of infections, whether it’s the flu or the coronavirus,” Boileau said. “If we still have to make progress with population-based measures like the ones that were taken in a context quite different from this one, that won’t be acceptable, so let’s try to live with that now.”

But it’s clear the cases are spreading, Boileau said. Quebec reported 1,088 hospitalizations on Sunday, with 56 people listed in intensive care.

At least three senior members of the Quebec government have been sidelined due to COVID-19 since late last week, including Premier Francois Legault, who announced he had tested positive last Thursday. .

On Sunday, Transport Minister Francois Bonnardel announced he had also tested positive and Deputy Prime Minister Geneviève Guilbault said she would work remotely after one of her children tested positive. She tested negative.

The message Boileau delivered on Sunday was for people to act responsibly at gatherings and social activities, use a rapid test if they show symptoms, and stay home if they get sick.

Boileau said if the isolation is at least five days for a positive test, he recalled that people remain contagious for 10 days.

He said those who are at higher risk of developing complications from the infection, whether due to age or because they are immunocompromised, should exercise greater caution.

“We are appealing to the civic sense of Quebecers,” Boileau said.

This report from The Canadian Press was first published on March 27, 2022.