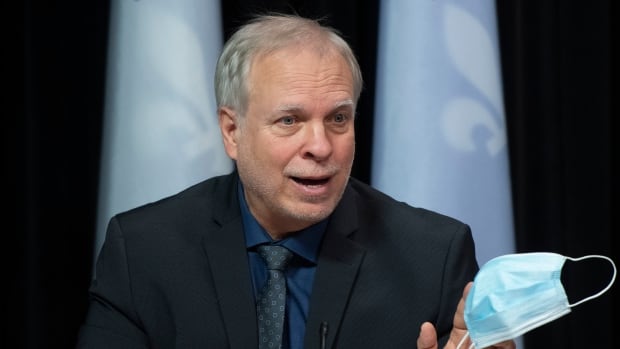 About two weeks before the province lifts nearly all masking requirements, Quebec’s acting director of public health says he’s not ruling out keeping the mandate and even possibly reimposing some health measures then that COVID-19 cases are rising again.

“All options are on the table,” said Dr. Luc Boileau in an interview on the Radio-Canada program. First hour Thursday morning.

But in a press scrum on Thursday, Quebec Health Minister Christian Dubé told reporters “there is no reason at the moment [… ] change strategy. »

On Wednesday afternoon, the province’s Public Health Institute (INSPQ) officially confirmed that Quebec is in its sixth wave of the pandemic, citing indicators such as the high positivity rate, the number of workers in the sickness and the number of hospitalizations caused by the highly contagious variant BA.2.

Key indicators have been rising since mid-March, and health officials believe they will accelerate in the days and weeks ahead.

“April will be a difficult month,” Boileau said, adding that cases will likely decline in May. He said it was time for people to understand the importance of this wave and above all, the habits to follow.

Boileau said that in accordance with public health guidelines, people should protect themselves strictly for the first five days, then remain vigilant for the next five by wearing a mask and keeping a distance of two meters from others.

“Resume some activities, but don’t go to parties, dinners, or see a lot of people or grandparents,” he said.

Boileau says he is counting on the common sense of Quebecers to be careful and reduce their contacts.

“If we are able to see this change in behavior and attitude in this wave, it will help us all.”

He said he was also monitoring developments closely and planned to make his recommendation to the government regarding the continued use of masks in public places next week.

More restrictive measures not part of the plan: Dubé

Speaking to reporters on Thursday, Dubé said that although the government is concerned about the increase in cases and hospitalizations, the situation was expected.

He said what was not expected, however, was the rate at which the BA.2 variant would spread. In the past few days, it has become the dominant strain in the province, accounting for 50% of infections.

Despite this, he said he was not worried about service interruptions as employees can now return to work after five days of self-isolation, which “will help a lot in being able to reduce the pressure on our employees”.

Dubé said the effect of the BA.2 subvariant is felt primarily in regions like Côte-Nord, Abitibi-Témiscamingue, Quebec City and Gaspésie.

“It’s because these are areas that haven’t been hit as hard by Omicron. So these are people who have less natural protection or immunity to Omicron than in the Montreal area,” he said. -he declares.

While Dubé encourages people in the regions as well as residents of residences for the elderly to be extra careful, he says that there are no plans to add restrictions in Quebec.

“People have to learn to live with the virus,” he said.

“Let’s make sure today we clarify how we want to remove the measures. But we need transitional measures […] to make sure we can act.”

INSPQ epidemiologist Dr. Gaston De Serres says that while the rise in cases will be much smaller than what the province saw during the holiday season in December, its severity will depend on how people behave.

“You have to understand that just because the government isn’t imposing restrictions doesn’t mean people shouldn’t restrict themselves in the number of contacts they have,” De Serres told CBC Montreal. Dawn.

The INSPQ predicts that if the number of contacts people have during this surge is similar to what Quebec experienced before Christmas, the surge will be substantial.

“We don’t know how high this wave will be,” he said.