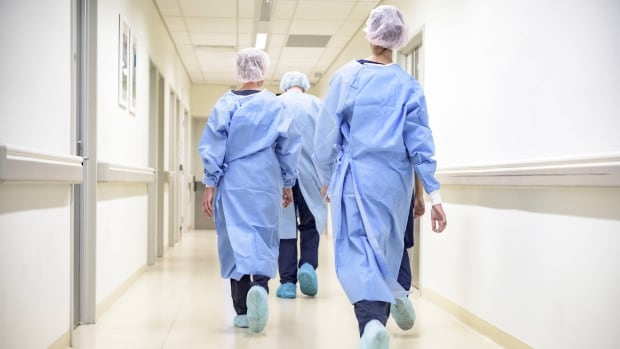 As the CAQ government promotes its new healthcare plan, promising better working conditions for nurses, some young nurses who work and study part-time say their voices are not being heard.

“I feel like we’ve kind of been left behind,” said Marie-Pier L’Ecuyer, a nurse who works part-time at a Center West Montreal Health Agency facility. , to CBC in an interview.

“It hurts. I feel like I’m up against a brick wall,” Garrett Johnson, another nurse who works for the same health organization, told CBC.

Both Johnson and L’Ecuyer began their nursing careers after graduating last spring. Both chose to work part-time while pursuing their studies.

And now the two are now forced by their new collective agreement to double the number of shifts they work, a requirement that has them considering leaving the public system.

Only full-time students are exempt

CBC first reported how increased workloads are affecting part-time nurses two weeks ago. Since then, some nurses who work and study part-time, including Johnson and L’Ecuyer, have reached out to share how the change is affecting them.

The new collective agreement between the government and the Quebec Interprofessional Health Federation (FIQ) was signed last fall. Since then, the measure targeting part-time nurses has been gradually rolled out across the province.

Under the previous agreement, part-time nurses had to work a minimum of eight shifts over a 28-day period, or two shifts per week. The new collective agreement increases this number to 14 shifts over a period of 28 days, almost doubling the workload.

The measure is mandatory for all part-time nurses in the public network, with a few exceptions. Nurses studying full-time are exempt and may continue to work two shifts per week.

But nurses like Johnson and L’Ecuyer, who study part-time, must double their number of shifts.

For L’Ecuyer, the change took effect in January. After earning her bachelor’s degree in nursing, she is now studying for a master’s degree in law. She wants to specialize in health law and policy.

The new collective agreement meant that she either had to add more work hours or add more school hours in order to keep her job.

L’Ecuyer decided to go from part-time to full-time studies, so that he could continue to work two days a week. The change has been intense.

“I won’t be able to maintain this type of schedule for the duration of my master’s degree,” she said. He still has two years of classes left, and a thesis to write afterwards.

“I’m thinking of going to work for a private agency,” L’Ecuyer said.

Johnson graduated with a college degree in nursing last spring. Now he is studying part-time for his bachelor’s degree while working two or three shifts a week. For him, the increased workload should take effect on April 10.

He said that once that happened, he would only have one day off every two weeks during the school year.

“I will be looking very intently to leave my position,” Johnson said.

“I really like where I work, but one of the huge advantages of the private sector is that they have very flexible hours,” he said.

“My education is more of a priority for me. I’ll choose that over maintaining a job that’s going to burn me out,” Johnson said.

Like other nurses the CBC has previously spoken to about the forced increase in workload, Johnson and L’Ecuyer both feel neglected by their union, the FIQ, which accepted the increased workload. part-time work.

“I think we’re not well represented, like a decision was made that didn’t take into account all the young nurses,” L’Ecuyer said.

Johnson said when the union presented the new collective agreement to members, it never mentioned the mandatory workload increase.

“Basically all I heard was we’re going to make you pay more,” Johnson said.

“I was unaware of this increased workload, and still couldn’t believe it when I saw it,” he said.

Both Johnson and L’Ecuyer said they find it ironic that their workloads are increasing just as the government releases its new plan that is supposed to improve the lives of nurses.

“People who are new to the profession all of a sudden have a bad taste in their mouths,” he said.

L’Ecuyer said she didn’t feel her working conditions were improving.

“We are the next generation of nurses. We are the future,” she said.

“We’ve been taught that bedside nursing isn’t the only option. We have so many opportunities, whether it’s research or teaching,” she said.

“We were taught to keep pushing. Being ambitious is a good thing,” L’Ecuyer said.

“But now the government is saying, ‘Stop, you have to be bedside nurses because that’s where we’re missing the most people right now in the public system,'” she said.

In a press release sent by email to Radio-Canada on Tuesday, a spokesperson for the FIQ, Liliane Côté, indicated that the union is aware of the challenges of part-time students and that it is working on solutions.

“The study period is a temporary period, and mechanisms exist to ensure that students have a lower workload,” Côté said.

“Requests can be made to employers for unpaid leave for studies or part-time leave without pay for studies to be granted to health professionals wishing to continue their studies,” she said.

She said affected employees should contact the union for help.

No one from the Department of Health was immediately available to comment.