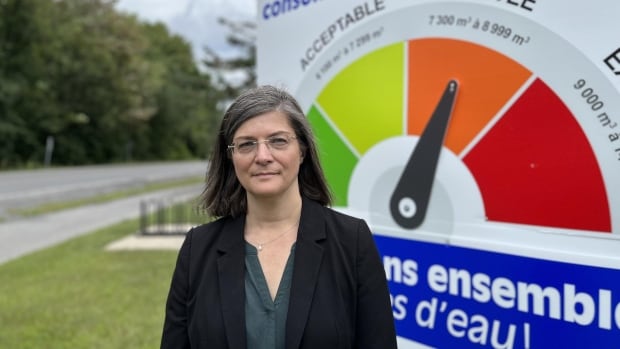 Quebec has three percent of the world’s fresh water, but municipalities west of the island of Montreal are increasingly concerned about their supply. Officials want the next government to force industries to pay more for the water they use.

Once a week, municipal workers in the town of Saint-Lazare, west of Montreal, adjust the arrow on the signs indicating the level of water consumption.

For most of this summer it has been pointed to “high”. The objective of the signs displayed around the municipality is to encourage residents to consume less water.

“Over the past few years we’ve had to go into a total watering ban mainly because of the droughts we’ve been experiencing and also because of COVID where a lot of people were at home and using more water than they used to. ‘usual,’ said the mayor. Genevieve Lachance.

“We’ve had to act to make sure we don’t get into these situations where we have to restrict water use.”

Saint-Lazare is part of the regional county municipality (RCM) of Vaudreuil-Soulanges, which this summer passed a motion asking the Government of Quebec to release data on groundwater consumption.

The MRC has argued that it needs more information on how much water is used by industries – and how much water is still available – to ensure sustainable development in one of the fastest growing regions. fastest in the province.

Industries use water “almost for free”

Quebec has three percent of the world’s fresh water, but municipalities in the south of the province are increasingly concerned regarding supply.

At this early stage in the election campaign, the Quebec Liberals have the most detailed platform on water, including a commitment to increase royalties on industrial water use to six times the current amount.

In the final days of the legislative session last June, the CAQ tabled a bill that would increase what the government charges commercial water users, in what amounted to an early election promise.

The party said earlier this month that it would use the new revenue to protect the province’s water supply.

Currently, the province charges pulp and paper mills, mines and aluminum smelters — the category of users who depend on huge amounts of water — $2.50 per million litres.

Another category, which includes bottled water companies, is charged $70 per million liters.

In total, the province brought in just $2.8 million in revenue last year from consuming 811 billion liters of water, according to budget documents.

Royalty rates in Quebec have not increased since their introduction in 2010.

The mayor of L’Île-Perrot, Patrick Bousez, prefect of the MRC de Vaudreuil-Soulanges, said he would like that to change.

“All we know is that they get this water almost for free,” he said.

Rates in Quebec are much lower than those in Ontario, driving the rate charged to bottled water companies to over $500 per million liters in 2017.

Roy Brouwer, executive director of the Water Institute and professor of economics at the University of Waterloo, said Quebec and the rest of the country need to take better care of their resources.

In Vaudreuil-Soulanges, 18 of the 23 municipalities depend exclusively on groundwater — and the MRC wants to protect this water from contamination and overuse by industry.

Mount Rigaud, much of which is covered in forest, plays a crucial role in the region.

Rain and melted snow seep into the ground at the foot of the mountain, replenishing the groundwater supply for nearby residents.

Bousez wants assurances from the government that the mountain will be preserved.

“Nearly 100,000 people get their water from underground, so we cannot allow any mining exploration,” he said.

Although no such project is imminent, the MRC produced a 73-page report in 2019 concluding that the region should ban future mining and gravel quarrying, given its reliance on groundwater.

Bousez said the CAQ government was not receptive to the MRC’s request to rezone the mountainous area to ensure its protection. He hopes the next government will make it a priority.

“Water is a problem everywhere”

Vaudreuil-Soulanges is not the only place in the province that wants more data on industrial water use.

Marc Bishai, a lawyer with the Center québécois du droit de l’environnement (CQDE), is one of those urging the province to force bottled water companies and other businesses to disclose how much water they use. they take from the ground.

He said municipalities don’t know how much water is being used and whether it poses a threat to their supply.

“We would need to have access to that data to be able to calculate the numbers,” he said.

“When private companies take large amounts of water and then refuse to inform the public, it’s really a problem for the public and for the municipalities.”

A recent report by Natural Resources Canada were concerned that although Quebec’s drinking water is “generally of excellent quality”, surface and groundwater could be affected by reduced flows due to climate change.

“Such a situation would aggravate anthropogenic pressures such as industrialization, urbanization, agricultural activities, the development of seaside resorts and the absence or inadequacy of wastewater treatment systems,” the report said.

In Vaudreuil-Dorion, a stone’s throw from Saint-Lazare, the construction of a long-awaited new hospital will soon begin.

The health facility is essential, said the mayor of Saint-Lazare, but it will also require a stable supply of drinking water.

“Water is a problem all over the world, not just here in Saint-Lazare, in the MRC or even in Quebec,” Lachance said. She wants to hear from all parties on what she says is such an urgent issue.

“We see droughts and water shortages in Europe. We see it in China, we see it in California. So that should be a main talking point during the election.”

Legault accuses Montrealers of “despising” the people of Quebec and Lévis