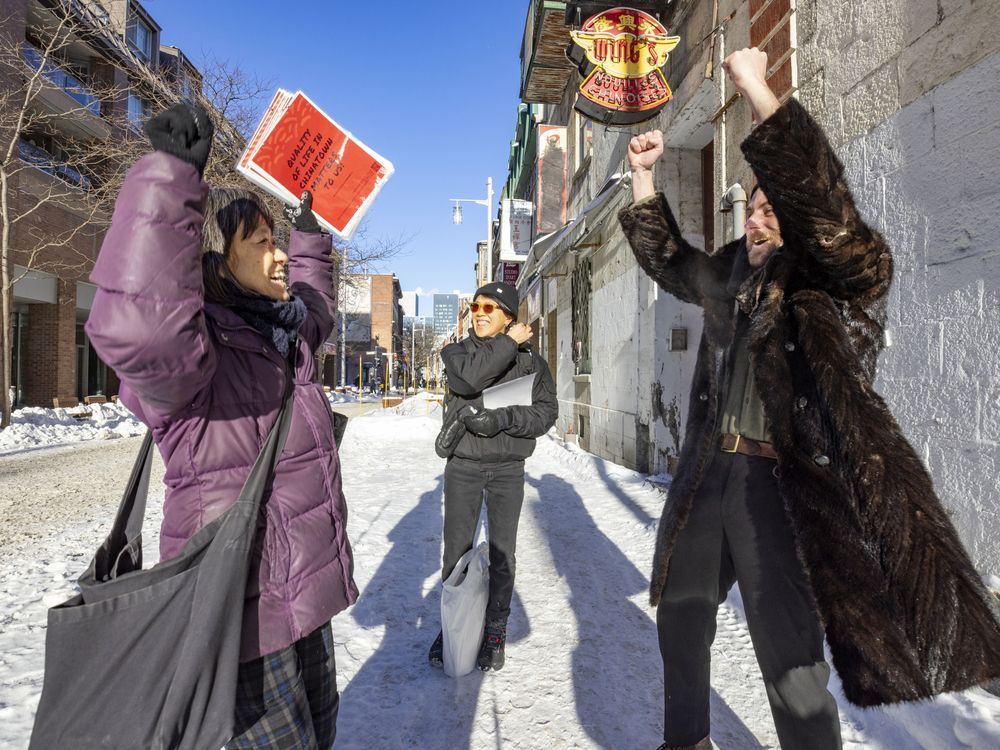 Community organizations and residents of Chinatown celebrate the announcement of the Government of Quebec and the City of Montreal’s intention to protect the historic district.

“It’s a wonderful way to start the year of the tiger,” Progressive Chinese of Quebec member May Ciu said Sunday.

In the meantime, the city council will modify the urban plan of Montreal in order to preserve the built heritage of the district, according to the agenda of its monthly meeting on Monday.

At a special meeting Friday, the city’s executive committee approved changes to the city plan, including new limits on building heights and densities in the neighborhood. Public consultations will take place on the zoning changes.

Council will also vote on an interim resolution preventing any new development that does not respect the revised zoning.

“I’m extremely happy, although obviously we didn’t get everything we wanted,” said Jean-Philippe Riopel, a tenant on rue de la Gauchetière who sounded the alarm bell last year after that his building and several others on the block have been acquired by developers. Brandon Shiller and Jeremy Kornbluth, who made headlines for the “renovation” of tenants across the city.

Roy will classify the block bounded by de la Gauchetière, St-Urbain and Côté streets. and Avenue Viger as a Quebec heritage site and designate it as the “institutional center” of Chinatown, Radio-Canada reported on Saturday.

The former British and Canadian school at 1009 rue Côté, at the corner of rue de la Gauchetière, will also be listed, he said. Today the Wing Noodle Factory, the four-story stone building designed by James O’Donnell, the architect of Notre Dame Basilica, is the oldest purpose-built school in Montreal.

The former Davis Tobacco Factory at 987-991 Côté Street will also be designated a provincial heritage site, according to the report. Built in 1884, it incorporates the exterior walls of the former Free Presbyterian Church of 1848.

The block also includes stone houses dating from the mid-19th century, when the area was still being developed into an urban quarter.

In the meantime, the City of Montreal will designate the block as a “sector of exceptional value”.

“What I really wanted was heritage classification for all of Chinatown,” Riopel said, “just like Old Montreal and Mount Royal.”

“But it’s a great start and it’s fantastic that we’ve been able to achieve this in just one year,” said Riopel, who launched an online petition to Quebec’s National Assembly in May calling for Chinatown to be designated as a historic district.

Chiu also said she hoped Monday’s announcements would be just the start.

“I think so far the community consensus is that this is an incredible first step and I must first emphasize that heritage protection is just one part of Chinatown’s action plan. “, she said.

Chiu asked why only one block received protection.

“We are very happy, but we have to be careful with the government to make sure that heritage protection is something that will be considered holistically and not piecemeal,” she said.

Chiu also called for the protection of “intangible heritage like family associations, social organizations and religious organizations which were all part of the very rich fabric of (the region)”, she said.

Montreal’s proposed zoning bylaw will reduce the maximum height of new buildings from 20 stories to about eight.

Pierre Guillot-Hurtubise, senior vice president of national public relations and media adviser to Shiller and Kornbluth, said the developers would review “the exact content of the announcement” before commenting.

So far, Chinatown has slipped through the cracks when it comes to heritage protection, said Dinu Bumbaru, director of policy for Heritage Montreal.

“Hopefully what happens tomorrow will turn the page and open a new chapter for this field,” he said via video chat from Dubai. “Chinatown is very important but it hasn’t been properly recognized, so that’s being fixed.”

Real estate development has increasingly squeezed into the neighborhood, one of the first areas outside of Old Montreal to develop.

It is important that it be recognized “rightly as a heritage place, and not just as another place of commerce”, he said.

There is a growing understanding of “different layers of Chinatown heritage, Scottish, French, Jewish, Irish of course, Chinese,” Bumbaru said.

Bounded by rue Jeanne-Mance, boulevard René-Lévesque, rue St-Dominique and avenue Viger, the district is the last surviving Chinatown in Quebec. Over the years, it lost ground to megaprojects like the Palais des Congrès and the Guy-Favreau Complex, which amputated a third of its territory in the 1970s and 1980s.

An illustration of Montreal’s “cultural mix,” the neighborhood “is also a reflection of our open and welcoming society,” Roy said.

“The result is a unique set in North America that we are proud of and that we must protect and enhance,” she said at the time.

Owners of condos in an aging building face $14 million in repairs. If they can’t pay their share, they risk losing their house.