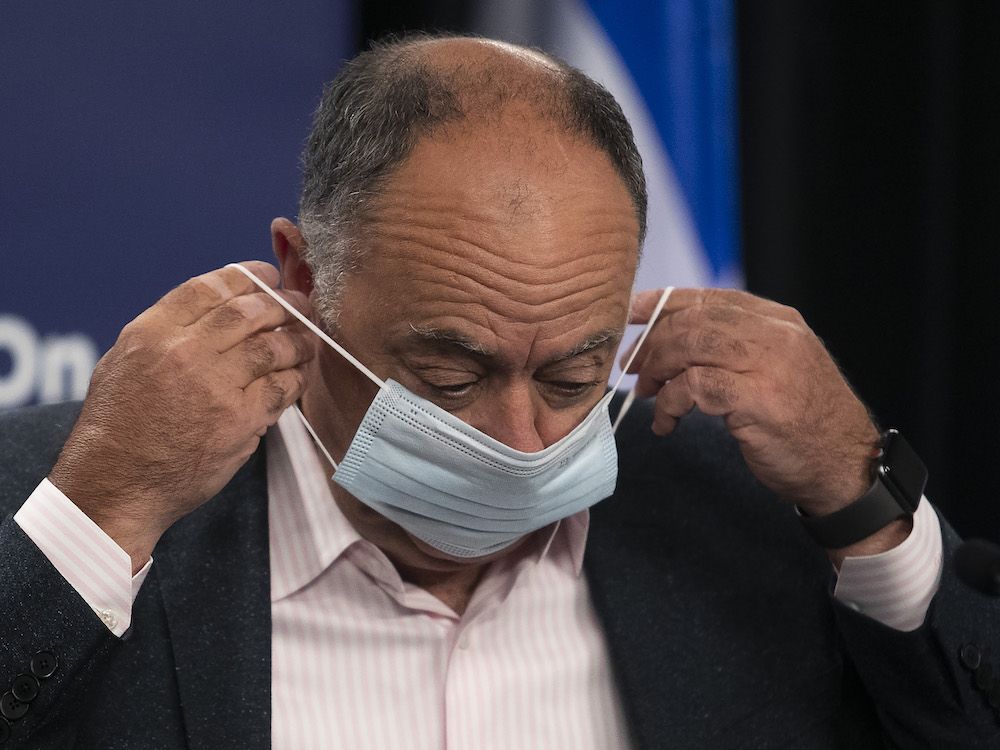 Quebec is in the 7th wave, but no COVID-19 restrictions are planned: public health

Quebec is in a seventh wave of the COVID-19 pandemic, but the situation remains “under control,” public health director Dr. Luc Boileau and health minister Christian Dubé said Thursday.

At an early morning press conference in Montreal, Boileau said he was waiting for official confirmation of the seventh wave from the Institut de santé publique du Québec, but that he believes it has started, given of the recent increase in cases, hospitalizations and deaths fueled by the new BA .4 and BA.5 variants.

“It already exceeds what we had in the fourth wave,” Boileau said. “It would be very doubtful if we didn’t settle into the same movement that we see in the world.”

The Ministry of Health announced Thursday that 1,534 patients in Quebec were hospitalized with COVID-19, an increase of 37 since Wednesday. Of those patients, 43 were in intensive care, an increase of three. The province also reported 16 additional deaths, bringing the toll to 15,646.

Depending on the province wastewater datathe presence of COVID-19 has been increasing since the beginning of June in Quebec City and mid-June in Montreal, Laval and Gatineau.

Boileau said on Thursday that the indicators are rising more slowly now than they were last week, and while there is some uncertainty, he expects the wave to peak sometime this month.

“It’s the expectation and also the hope that we have,” he said.

Although they consider the situation under control, Boileau and Dubé said Quebecers must continue to be “extremely vigilant” during what will be a difficult summer for the health care system due to staff shortages related to vacations and cases of COVID-19. As of Thursday, there were 7,318 healthcare workers absent from the network for reasons related to COVID-19.

“It is important to avoid finding yourself in a situation that will constitute a new problem of access to health services,” said Mr. Boileau.

Officials attributed the seventh wave to failure to follow isolation guidelines and remind those who test positive for COVID-19 to stay in isolation at home for five days, then wear a mask and avoid seeing d other people for another five days.

“The virus is there, it is being transmitted, it is circulating – the pandemic is not over,” Boileau said.

However, there are no plans to reapply public health restrictions – the last of which was lifted in June, when masks became optional on public transport. For this to be considered, Boileau said as an example, the province would have to deal with a more lethal variant that would increase “the risk to the system and the people, their mortality, their morbidity.”

“But that’s not what we’re up against right now,” he said.

Despite the fact that the restrictions will not be reintroduced, Dubé said, the “ground rules” still apply.

“When we said basic rules, we said that in public transport, even when we removed the obligation, we said that it was a very good idea… for those who want it, to continue to wear their masks. And that’s what we’re reminding people of today,” he said.

Dubé was recently in Denmark for a conference of health officials and said Thursday there was a common understanding that warrants are no longer needed because people are well aware of the risks associated with COVID-19.

“We just have to remind them,” he said. “So if there’s a clear message, it’s to say… when you’re in a place where you feel like there may be a higher risk — it could be on the subway, it could be in an enclosed space, it could be because of closeness even sitting in a park – why not keep your distance or make sure you have a mask?

The public health view, Boileau said, is that actions taken by individuals should be sufficient to limit the spread of the virus amid the seventh wave despite the transmissibility of new variants, given that they are not more deadly.

“The best thing to do is not to shut down the organization of society, but to allow it to continue with the measures recommended for individual contribution,” he said.

Amélie Boisclair, an intensive care physician at Pierre-Le Gardeur Hospital in Terrebonne, said Thursday that for Quebecers to make the right decisions as cases rise, they need the right tools.

“I think if you want people to adapt their behavior, maybe you have to find a clear way for them to understand the current situation,” she said. “Right now we’re in a seventh wave, there’s a huge increase in cases, but we know the message isn’t getting through – either because people are tired, they’re confused, there’s too much information .”

Boisclair tweeted in Dubé after Thursday’s press conference, suggesting better communication as well as the creation of a color-coded system corresponding to the epidemiological situation in a given area, which could be accompanied by a set of recommended behaviors.

“The average citizen doesn’t watch press conferences at 9 or 11 a.m., and we’re in a public health crisis,” Boisclair said in an interview. “In these cases, we shouldn’t have to search for the information. It must be given to us and easily accessible to all.

Dubé responded, calling it a “good suggestion”, and said the government was preparing “specific messages to be broadcast in certain media and to target certain regions of Quebec if necessary”.

During the conference, Dubé and Boileau repeated that vaccination is an important measure for Quebecers to protect themselves. They hope to get this message across by providing guidelines on when to get boosteddepending on factors such as previous infections.

To control the spread of COVID, people are encouraged to follow isolation rules and get vaccinated. A table is also available to clearly indicate who should get their booster dose. https://t.co/LTjCQ3kTtk pic.twitter.com/HttNmheaFE

They also reminded Quebecers that the fourth doses are open to everyone, but are particularly crucial for vulnerable groups.

The province reported Thursday that another 1,755 cases of COVID-19 had been confirmed by PCR testing at its clinics. Since this screening method is not accessible to most Quebecers, the case figures are not representative of the situation in the province.

The current seven-day rolling average for new cases is 1,351.

Help support our local journalism by by subscribing to the Montreal Gazette here.