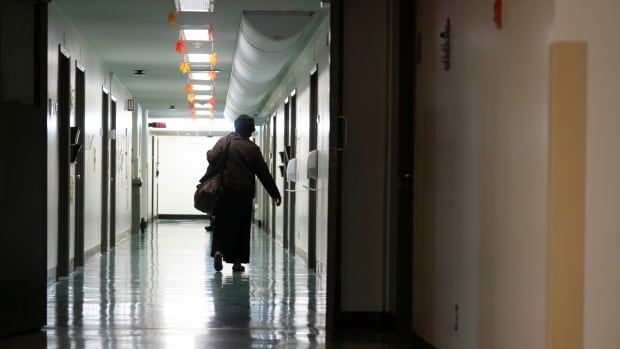 In a move that angered unions and healthcare workers, the Quebec government is proposing a controversial measure to deal with a hospital staff shortage as COVID-19 cases increase.

The highly transmissible Omicron variant means that thousands of healthcare workers are currently unable to work.

In response to the absences, which are depleting an already short staff list and exacerbating the long-running job crisis in Quebec hospitals, Radio-Canada has learned that the government is seriously considering allowing COVID-positive asymptomatic healthcare workers. 19 to remain in office. work.

Several unions denounce the controversial measure, which has been an option for health establishments since last March by a government document, but that very few have implemented.

“We do not want infected workers to return to the hospital,” said RÃ©jean Leclerc, president of the FSSS-CSN union, which represents more than 130,000 health workers in Quebec.

“It’s like letting the wolf into the sheepfold,” he said, noting the inevitability of transmission as infected and uninfected workers pass each other in the hallway and share the same cafeteria.

Under this measure, asymptomatic infected workers would work exclusively with COVID-19 patients so as not to infect further admissions. But Naveed Hussain, a nurse at the McGill University Health Center, says the new variants “are a game-changer.”

â€œThings are moving pretty quickly,â€ Hussain said. “You could have someone who is asymptomatic and infected and within hours is symptomatic, and the next thing you know, we are infecting patients and infecting our colleagues … and we are losing more healthcare workers.”

Julie Bouchard, president of the FIQ, the largest union of nurses in Quebec, urged the government to rethink the measure in an email sent to the Ministry of Health and obtained by CBC Montreal.

“It would be irresponsible to expose other essential workers when we will need all the resources to treat the infected population,” Bouchard wrote.

She said the measure could “seriously compromise the safety of healthcare facilities and the public’s confidence in them.”

The FSSS-CSN and the FIQ implore the government to reinstate some of the measures imposed in long-term care establishments and hospitals during the previous waves, in particular the establishment of hot and cold zones in hospitals, the limitation of mobility staff between centers and the provision of N95 masks. to all staff.

“We have to take more precautions because this time around we know what we are dealing with – we have been living it for 20 months,” said Leclerc.

On Thursday, Radio-Canada reported that the province had purchased an additional 10 million N95 masks to increase its stock, in addition to the 15 million it had in reserve. They will be used to equip more health workers, but not all.

Leclerc says the masks must be made available to everyone, adding more health workers who fall ill at the same time will result in a “system shutdown.”

“We cannot be half protected, we must be sufficiently protected to avoid absences,” he said.

the The CIUSSS du Center-Sud-de-l’ÃŽle-de-MontrÃ©al also issued a directive on Thursday to recommend the wearing of the N95 in “cold” areas of hospitals, without waiting for Quebec to move on the issue.

On Friday, the Commission de la sÃ©curitÃ© au travail du QuÃ©bec, the CNESST, issued a directive requiring the increased use of N95 masks for healthcare workers at risk in the face of the resurgence of COVID-19 cases and the arrival of the Omicron variant.

“The CNESST demands the extension of coverage and the use of the N95 mask to those providing care in the most risky situations, including certain situations in cold areas,” read a press release.

Earlier, the government had announced that it would distribute N95 masks mainly in emergency rooms and in family medicine groups (FMGs).

Nurse Hussain said he would support the call, despite the obvious risks his colleagues face on a daily basis.

“Our resources are limited … We have to share these resources appropriately and adequately,” he said.

“This is an invisible war … As healthcare workers, we are soldiers in this fight. We will continue to fight because our priority is to protect our patients.”