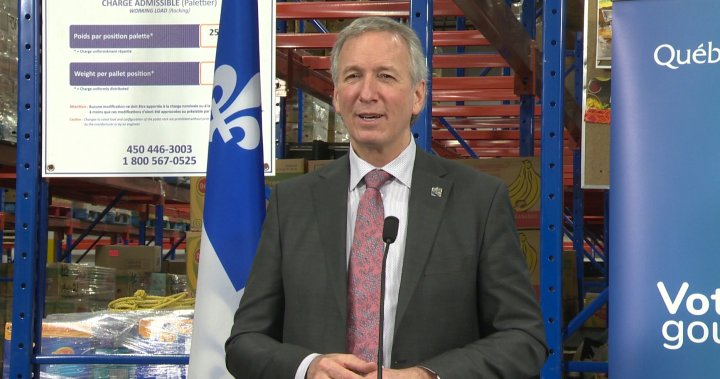 The COVID-19 pandemic and rising inflation have led to a significant increase in demand from food banks in Quebec. Many of them expect the number of visits to skyrocket during the holidays.

The Quebec government on Monday announced a $ 3 million investment in food banks across the province ahead of what will be another busy Christmas season.

Food bank use in Canada increased by 20% during pandemic, report says

This poses another problem: where to store all the food they need now.

â€œThey found they were running out of refrigerators or trucks or sometimes the whole infrastructure needed to be refurbished,â€ Lamontagne said.

â€œAt the start of the pandemic, we had a growth in demand on food banks of between 30 and 50%. Now it’s around 21 percent, â€said Martin Munger, general manager of Food Banks of Quebec.

On Rock Community Services in the West Island said it would receive a grant for its 2,000-foot extension to its facility.

Before the pandemic, Reid said they were helping 210 families a week. Now it’s around 260.

â€œSo many people coming and saying ‘I never imagined myself here. I never thought I would be at the door of a food bank, â€said Reid.

â€œDue to the inflation we are suffering from, we are welcoming new people that we might not have seen before,â€ said Adrian Bercovici, Executive Director of the Generations Foundation.

The Generations Foundation feeds approximately 8,500 children a day in Montreal and on the South Shore.

â€œThe working poor, they work and they just don’t make enough money to pay every bill, so one of the first places that gets cut is food,â€ Reid explained.

“Because if you don’t pay your rent, you’re going to lose your apartment, right?” You don’t pay for your car, you’ll lose your car and you won’t be able to do anything.

Fortunately, he said those who can donate are generous.

â€œWe hope to help as many people as possible and there should be no hunger in Montreal or anywhere in the world,â€ Bercovici said.

Coronavirus outbreak: West Island charity work on the rise during COVID-19 pandemic – May 2, 2020

The Opioid Crisis Among First Nations in Canada