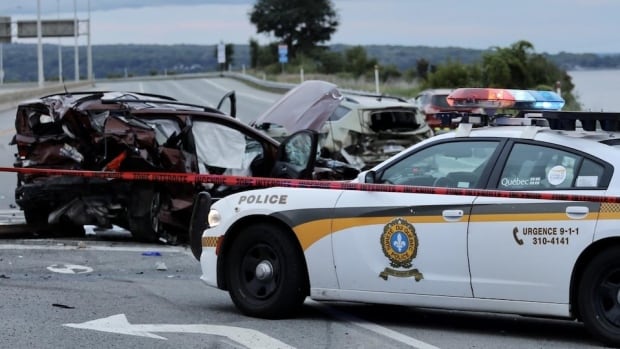 The Quebec motorist who killed two children, their mother and grandfather last fall when his car hit theirs, has been sentenced to 16 years in prison.

Éric Légaré, 44, was under the influence of alcohol and speeding when the vehicle he was driving crashed into three other vehicles waiting for a left turn signal at an intersection in Beauport, Quebec on 2 September 2021.

Emma Lemieux, 10, her half-brother Jackson Fortin, 14, their mother, Shellie Fletcher-Lemieux, 44, and grandfather, James Fletcher, 68, all died of wounds suffered during the collision.

“It’s not a question here of determining the cost of a life,” Quebec Court judge Jean-Louis Lemay said during Légaré’s sentencing hearing in a courtroom in Quebec Friday.

Lemay said his job is to determine a just sentence based on objective facts, the law and legal precedent. He said it’s important to match the severity of a sentence with society’s changing view of driving under the influence.

“It is incumbent on the courts to use the tools provided by Parliament to tackle this societal evil,” Lemay said in his ruling.

The Crown had asked for an 18-20 year prison sentence for Légaré and a lifetime driving ban, but prosecutor Pierre-Alexandre Bernard said he was ‘not at all disappointed’ with the 16-year sentence – the longest ever imposed in Quebec for a crime committed in similar circumstances.

Another Quebecer, Roger Walsh, made get a life sentence for the hit-and-run death of Anee Khudaverdian while driving under the influence in 2008, Walsh had 19 drunk driving convictions and a long list of other criminal offenses.

By comparison, Légaré had only one prior conviction for driving under the influence, in 2017.

Bernard said he hoped Légaré’s sentence would send “a clear message to anyone who tries and commits these kinds of offences, that these offenses are not tolerated in our society.”

Légaré’s lawyer, Vincent Montminy, said he found the sentence reasonable, although it is significantly longer than the 10 years he had sought.

“I consider it a judgment that is adequate,” he said.

Montminy, who spoke to Légaré after the decision, said his client is devastated but will not seek permission to appeal the sentence.

“He didn’t fall out of his chair. He knew he was in that stadium, that’s for sure.”

During his trial testimony, Légaré had broken down in tears and expressed his remorse to the families of the victims, saying he regularly had nightmares about what he had done.

He admitted to drinking and smoking weed more frequently in the months leading up to the accident due to difficulties in his personal life.

The courtroom was packed for the sentencing hearing, with relatives of the victims and the convict waiting intently.

Jackson’s father, Daniel Fortin, said he shook hands with his two friends very tightly when the judge announced his decision. He said he was relieved and somewhat pleased with the strong message the harsh sentence sends.

Although he said no sentence could ease the pain of losing his child, he felt like a weight had been lifted from his shoulders with the end of the legal proceedings.

“It’s a little bandage on the wound,” he said. “We will be able to start mourning.”