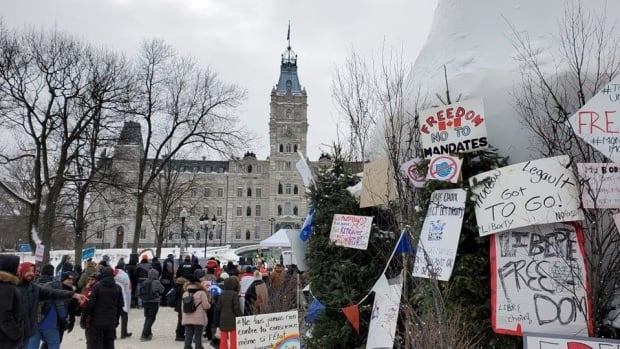 Quebec police say those protesting public health measures outside the National Assembly must move their parked vehicles, which include at least two dozen heavy trucks, or face fines and towing.

The police department (SPVQ) made the announcement on Twitter on Sunday afternoon, stating that protesters have until 5 p.m. to comply.

Protesters, some carrying signs or waving flags, began gathering in the morning as the protest entered its fourth day.

“The way this weekend has gone is magnificent. Unique. Quebec has stood up,” said Bernard Gauthier, a protest organizer addressing the crowd on Sunday.

“We were asked to demonstrate peacefully, that’s what we did.”

He and other organizers spoke into a microphone from a makeshift stage as police watched quietly, wearing reflective yellow vests and face masks while standing guard outside the National Assembly.

The crowd cheered and chanted “freedom (freedom)” as car horns blared and music blared from the loudspeakers.

Sunday’s protest was smaller than Saturday’s which was about a kilometer long at its peak, but Mayor Bruno Marchand said it had been peaceful so far.

“As long as it goes like this, there’s no problem,” he told reporters in the afternoon as he attended the popular Carnaval de Québec, an annual event that involves block several streets to vehicular traffic.

But Donna Ouellette was not too happy.

She owns a grocery store and another business on Saint-Jean Street and lives near the National Assembly. It was significantly delayed by rumbling traffic on Saturday.

“I had to go shopping, the police wouldn’t even let me go down Saint-Jean Street. I was stuck in traffic for three hours to get to my parking lot,” she said. said, calling the incessant noise “disrespectful”.

DEMONSTRATION | From 5:00 p.m., any vehicle immobilized in a prohibited place is liable to a fine and even towing in order to avoid the continuation of the offense pic.twitter.com/5cAyjpY5ic

Similar to the protest in Ottawa that began the previous week, convoys of trucks and other vehicles rolled into Quebec City Thursday night with horns honking and lights flashing.

People also gathered on foot near the National Assembly, waving flags and holding signs calling for an end to mask mandates and other health restrictions.

The SPVQ issued warnings Sunday morning to trucks parked on René-Lévesque Boulevard, saying the vehicles will be towed if not moved.

The SPVQ indicates that officers distributed 15 tickets for violations of the Highway Safety Code and issued 17 parking tickets overnight. It is unclear how many of these tickets are related to the protest.

Around 8 p.m. Saturday, officers arrested a 31-year-old man for blocking traffic with his vehicle. The vehicle was then towed to clear the way.

Prime Minister François Legault “will no longer have the choice to back down,” Keven Bilodeau, an organizer of the demonstration, said on Sunday.

On Thursday, Legault sent a strong message to those considering participating in the protest: “We will not tolerate any chaos. The prime minister continued to post on Twitter over the weekend, but said nothing about the protest.

Among the protesters, which included people of all ages, was Vincent Bélanger. He has come a long way from his home in Port Cartier on Quebec’s North Shore to speak out against the province’s vaccination passport, calling it “discriminatory”.

Another protester, Jérôme Bergeron, said: “We are fed up with health measures, there is some inconsistency in what the government is telling us,” he said.

On the other side of René-Lévesque Boulevard on Saturday, a small counter-demonstration took place. Some of them encouraged drivers to honk if they had been vaccinated.

Quebec’s acting director of public health, Dr. Luc Boileau, said earlier in the week that the easing of public health restrictions could lead to “more contagion, with the risk in particular of seeing more hospitalizations” .

Either way, the provincial government is moving forward with its plan to reduce the measures.

From Monday, performance halls and cinemas can open at 50% capacity, for a maximum of 500 people.

Next week, gyms and spas will be allowed to open at half capacity. Gyms and other fitness centers have been closed in the province since late December, when they were closed to limit the spread of the Omicron variant of COVID-19.