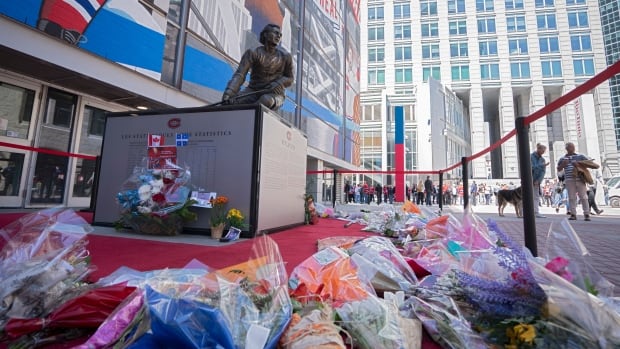 Quebecers and hockey fans around the world will salute Canadiens legend Guy Lafleur today as the province holds a state funeral in his honor.

Lafleur, who won five Stanley Cup titles and was a Quebec hockey hero long before his NHL playing days, died after a series of protracted health issues, including lung cancer. He was 70 years old.

The funeral of the man affectionately nicknamed the blonde demon kicks off at 11 a.m. ET at Marie-Reine-du-Monde Cathedral in downtown Montreal.

You can watch special funeral coverage here starting at 10 a.m.

The ceremony follows two days of public visits to the Bell Center, where thousands of people lined up for hours for the chance to pay their respects.

Thousands of people flocked to the Bell Center in Montreal to pay tribute to Guy Lafleur. The visit was open to the public on Sunday and Monday. 1:27

CBC will broadcast the ceremony live with English translation. Here’s how you can follow:

On TV: CBC News Network will be live from the Marie-Reine-du-Monde Cathedral on Tuesday morning starting at 8 a.m. A special post-ceremony broadcast, with live translation, will begin at 10 a.m. Local programming in Montreal will continue coverage throughout the day.

On the radio : A Montreal radio special will air on 88.5 FM — and Quebec Community Network stations — Tuesday from 11 a.m. to 1:30 p.m. ET, hosted by Shawn Apel and co-hosted by Shawn Lyons, including Live updates from the scene from local reporters.