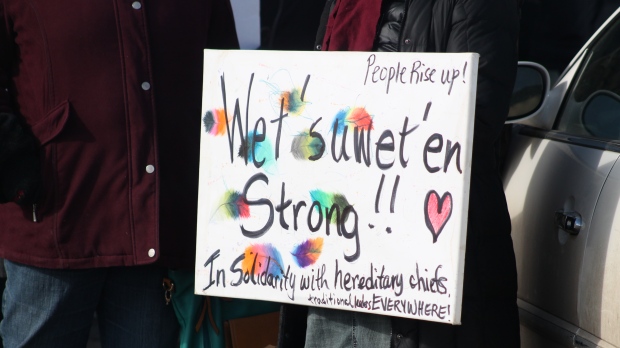 MONTREAL – Protesters in Kahnawake took to the roads on Wednesday to form an ongoing blockade in solidarity with the Wet’suwet’en hereditary chiefs, who oppose a proposed pipeline in northern British Columbia on their territory.

The event took place around 1 p.m. Wednesday as protesters slowed traffic on highways 132 and 138 south of Montreal.

If completed, the pipeline would transport natural gas from Dawson Creek in northeastern British Columbia to Kitimat on the coast. According to Coastal GasLink, the company that administers the pipeline, the project is more than half complete.

Last week, mounted police in northern British Columbia said they were enforcing an injunction prohibiting protests from blocking an access road used by workers on the Coastal GasLink pipeline.

The RCMP arrested 15 people on Friday – including two journalists – following a series of demonstrations which blocked access to this road.

The dispute over the 670-kilometer pipeline already erupted in 2019 and 2020, with Kahnawake land defenders shutting down part of the CP railroad running through their community.

At the time, several other protests erupted across the country, including dams nearby in Listuguj, a MiêžŒgmaq First Nation in eastern Quebec, and in Belleville, Ont..

Several people were arrested in 2020 when the RCMP enforced a court ruling that established an exclusion zone in areas where protesters were blocking access to the construction site.

Now, a year later, the Mohawk Council of Kahnawake (MCK) said in its Tuesday statement that â€œno one wants the events of early 2020 to repeat themselves, when the anger and frustration over the brutal actions RCMP have turned into protests across the country. . “

MCK called on Canadian policymakers to meet face-to-face with local leaders to resolve the conflict.

â€œIn 2020, the situation only calmed down after high-level representatives of the federal and provincial governments met with traditional chiefs to come to an understandingâ€, We read in the press release.

â€œIt is unfortunate that this recent history can be forgotten so quickly. “

In 2020, Wet’suwet’en hereditary chiefs visit Kahnawake in their last leg of a tour of the Eastern communities that have supported them.

At the time, a ceremony was organized to formalize a partnership between the traditional leaders of the two communities.

The MCK said on Tuesday it was “committed to respecting and supporting this relationship by remaining available to offer assistance, should it be requested.”