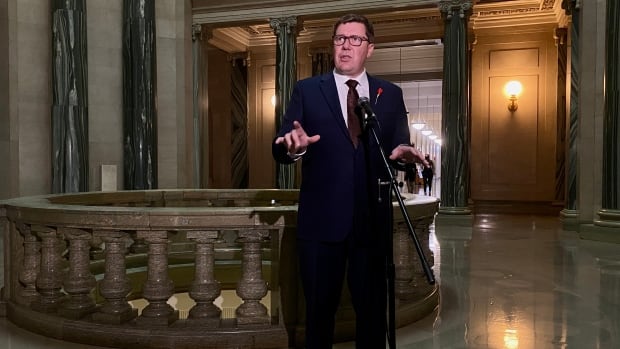 Saskatchewan Premier Scott Moe has said he wants the province to be a â€œnation within a nationâ€ by increasing its autonomy in several areas, including policing, taxation and immigration.

Moe made the initial statement in a radio interview on Sunday, then brought up the idea again on social media Tuesday morning.

â€œSaskatchewan has to be a nation within a nation,â€ he tweeted. â€œWhen the federal government implements policies that are detrimental to our province, our government will continue to stand up for the people of Saskatchewan.

On Tuesday afternoon, Moe said he “is not talking about separation. We are talking about being a Saskatchewan cultural identity within the nation of Canada – but being a nation within a nation.”

When asked what makes Saskatchewan a â€œnationâ€, Moe replied that language is not the â€œonly indicator of cultureâ€.

The federal government has made decisions “quite damaging” to the province, he said.

Saskatchewan must be a nation within a nation.

When the federal government implements policies that are detrimental to our province, our government will continue to stand up for the people of Saskatchewan. pic.twitter.com/zysN0oOe5w

He specifically mentioned his disagreement with Prime Minister Justin Trudeau’s announcement last week of a plan to cap oil and gas emissions.

Moe said he expected a phone call from the federal environment minister or Trudeau.

â€œThey didn’t have the decency to pick up the phone and consult this province,â€ Moe said.

In last month’s Speech from the Throne, the government indicated that it wanted to “build a stronger and more independent Saskatchewan within Confederation.”

On Tuesday, when asked what he wanted to be a â€œnation within the nation,â€ Moe pointed the finger at Quebec.

â€œQuebec has a very different immigration agreement with the federal government than we have here in the province of Saskatchewan. We want this agreement, â€he said.

â€œWe saw Quebec more recently with the child care agreement – Quebec has a very different agreement from all the other provinces in Canada. And we want it too.

Moe referred to his Saskatchewan. The throne speech from the party government, which said it “would consider other measures to strengthen provincial autonomy”.

This includes the resumption of corporate income tax administration in Ottawa and “the creation of a provincial police force to complement the municipal police force and the RCMP,” the Speech from the Throne said.

Moe also spoke of the expansion of the province’s international trade offices on Tuesday.

In September, he announced his intention to open international trade and investment offices in London, Dubai, Mexico City and Ho Chi Minh City by April. This follows the launch of offices in Tokyo, New Delhi and Singapore in January this year.

Declaration a “distraction”: the opposition

Deputy NDP Opposition Leader Nicole Sarauer said Moe’s “nation within nation” statement was an attempt to distract from the COVID-19 situation in Saskatchewan.

â€œWe currently have an appalling COVID death rate. The Prime Minister could not even ensure the safety of his own citizens and had to rely on federal assistance to come and transport the residents of Saskatchewan to Ontario.

Sarauer said Moe should defend the province federally, but Saskatchewan “is a province – a very important province” rather than a nation.

5 of Saskatchewan ICU patients have died in Ontario

Premier Scott Moe says he doesn’t expect more COVID patients to be transferred out of the province for care as hospitalizations and the number of intensive care units decline. 12:46

Sarauer agreed with Moe’s position that the federal government should have consulted with the provinces before announcing an emissions cap plan.

â€œI think it’s really important that the federal government doesn’t do anything unilaterally. It is important to ensure that the voices of all provinces, including Saskatchewan, are at the table and that what is decided works for the province.

Two prairie political parties that have pleaded for independence for the West endorsed Moe’s social media post on Tuesday.

This included the Maverick Party, formerly Wexit Canada, which recently fielded candidates in Western Canada in the federal election.

On May 25, 2021, Jay Hill of Maverick sent an open letter to Premiers Kenney and Moe, recommending that the provinces move forward to become a nation within a nation: https: / /t.co/RPAwDwuDQ6
No word from Kenney or any other Western Prime Minister yet.https://t.co/2iT080jA3J pic.twitter.com/74hVnT7Fap

On Twitter, the party applauded Moe “for taking the time to read our platform and market it for us.”

This platform includes “a provincial police force, provincially controlled immigration and control of our own taxes”, the party tweet read.

The Saskatchewan government under Moe’s leadership has made no secret of its desire for more autonomy.

After the 2020 provincial election, Moe pledged a â€œstrong and independent Saskatchewanâ€ in his victory speech. When asked if this was a reference to the separation, Moe replied that he did not support the idea.

â€œSaskatchewan is a strong and independent province. But we are also part of the Canadian nation, â€Moe said at the time.

After the 2019 federal election, Moe met Trudeau. Following the meeting, he told Ottawa media that Saskatchewan would look for ways to increase its self-reliance.