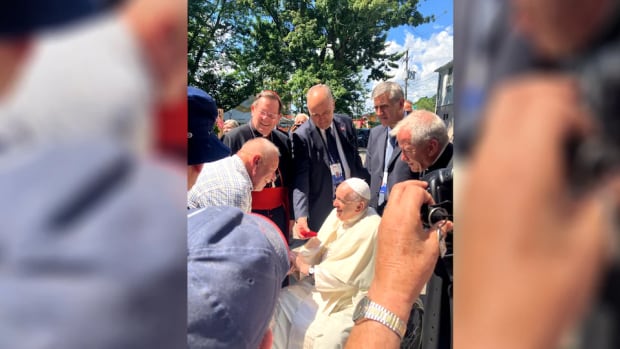 The priest held back tears on Thursday when the pontiff stopped by Fraternité Saint-Alphonse, a facility for people with substance use disorders in Beauport, Que., northeast of Quebec City. Earlier in the day, the pope celebrated mass at Sainte-Anne-de-Beaupré.

“He was smiling. His eyes were shining,” said Morency, who founded the fraternity some 30 years ago. “For me, it’s a big wink from God for the Saint-Alphonse Fraternity.”

Pope Francis spent about 20 minutes at the center, offering gifts including rosaries and an icon of Mary and Jesus.

During the secret stop, Morency says, a bodyguard introduced him to the pope. It was then that the pontiff handed him envelopes containing a $20,000 donation to the fraternity.

“He grabs my hand and puts it in my hand. He said: ‘It’s for the poor, Father Morency'”, recalls the priest.

It was only after the procession had left that Morency realized what was in the envelopes.

The priest says the center owes the visit to Quebec Archbishop Gerald Cyprien Lacroix, who has promised to bring the pope to the organization if the pontiff ever visits Quebec.

When Morency learned that the pope would make a tour of Canada, he wrote to the archbishop of Quebec to remind him of his promise. And the archbishop kept his word.

To ensure the presence of volunteers and residents, Morency invited them to a special dinner to thank them for their involvement in the centre.

He says the pope’s surprise visit moved locals, even non-believers.

“There were some who were crying, who had watery eyes. His presence at home may have triggered something inside these people,” Morency said.

A National Indian Residential Schools Crisis Line has been established to provide support to former students and those affected. People can access emotional referral and crisis services by calling the 24-hour National Crisis Line: 1-866-925-4419.

Montreal Pride sets out the demands of LGBTQ2+ communities