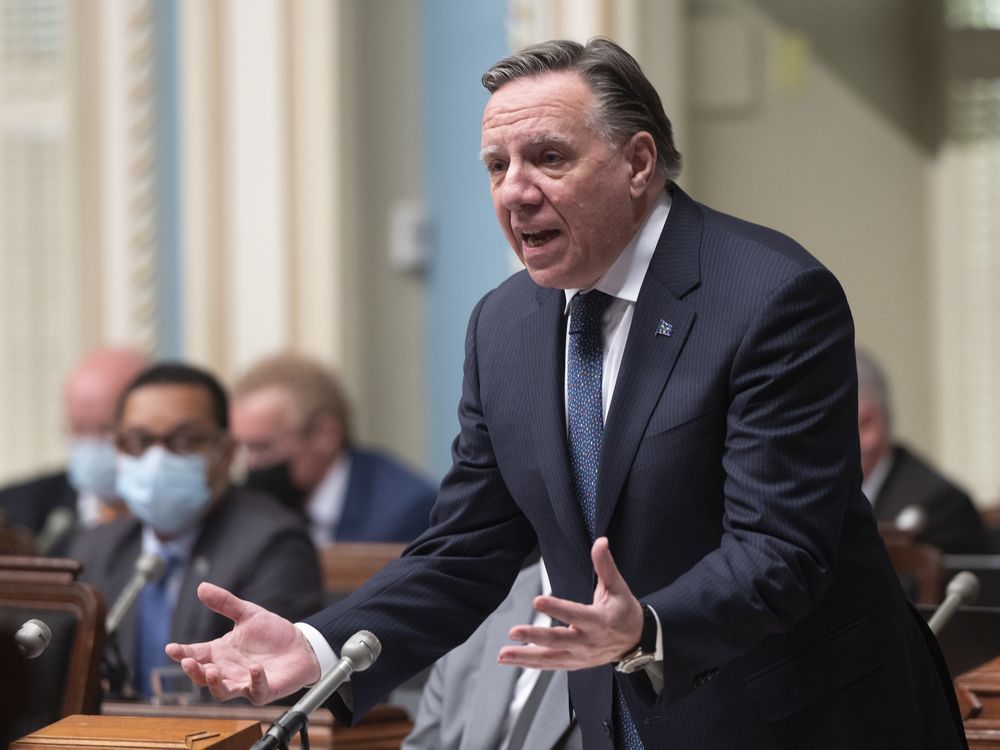 DRUMMONDVILLE — Bolstered by a new poll showing that they are ahead in public opinion, more than 1,000 members of the Coalition Avenir Québec will meet this weekend to plan the electoral road ahead.

CAQ members from across Quebec will gather at Centrexpo Cogeco Drummondville for the party’s sixth political convention since 2012. Scheduled to attract around 1,200 members, the event will have tight security, with a number of groups planning to organize protests, including unionized workers in negotiation with the government.

The weekend’s theme is Quebec pride, which is part of the party’s stated nationalist political agenda, which revolves around, among other things, identity issues such as language and immigration.

The CAQ government, which is coming to the end of its four-year mandate, has already passed two major laws on these topics. In June 2019, the National Assembly passed Bill 21 on state secularism and this week it passed Bill 96, revamping the Charter of the French Language.

Bill 21 is being challenged in court and Bill 96 goes in the same direction.

This weekend, delegates will debate a resolution from the CAQ’s steering committee asking the government to make contemporary Quebec history courses compulsory in CEGEPs. The motion states that such a measure would help young people “develop a sense of pride and deepen their understanding of current political debates”.

Another asks the government to review the teaching of French in primary and secondary schools, and to make it a priority. A resolution calls for the creation of a national museum of Quebec to highlight 400 years of history.

A third proposes that a CAQ government reiterate its demand that Ottawa transfer all powers over immigration to Quebec “as soon as possible”.

A Quebec vs. Ottawa battle over immigration appears to be a theme the CAQ will use in the campaign leading up to the October 3 election. This week, Premier Francois Legault said he wanted a “strong mandate” from voters to force Ottawa to give up the power it holds over the family reunification immigration category.

The nationalist resolutions are unlikely to create much division in the party which will remain united due to the impending elections. There are no resolutions on the table regarding pressing issues, such as inflation or the housing crisis.

As in the past, the convention coincides with Legault’s birthday and includes a social event on Saturday with a special guest. Legault turned 65 on Thursday.

The mood will be optimistic, since the CAQ received good news on Friday in the form of a Léger poll on voting intentions, showing that the party is surfing towards a second term.

Four months before the elections, the poll conducted for Le Journal de Montréal and TVA puts support for the CAQ at 46%. This indicates that the party has regained some support it lost in its handling of the COVID-19 pandemic.

The other parties are far behind in the general classification. The Liberals have the support of 18% of voters, the Conservative Party of Quebec 14%, Quebec solidaire 13% and the Parti Quebecois 8%.

The poll is a cold shower for the Liberals. After launching a charming campaign and demonstrating on May 14 against Law 96, Dominique Anglade’s party only managed to recover two percentage points from non-French-speaking voters.

The Liberals now have the support of 48% of voters in this category. The party had the support of 46% of non-Francophones in March and April, compared to 59% before its poorly received proposal to increase the number of basic French courses in Anglophone CEGEPs.

Their current status is a far cry from the glory days of former leaders Philippe Couillard and Jean Charest, when the Liberals had 70-80% support from non-francophones.

The CAQ dominates the category of French-speaking voters, with 53% of voting intentions.

Satisfaction with the CAQ government is up three points, with pollsters saying the increase is linked to the $500 check many Quebecers received when they filed their annual tax returns , to help deal with the effects of inflation and soaring gasoline prices.

The survey shows that 61% of Quebecers would like the government to write another check. Legault has been hinting for days that he will.

If there is a dark cloud for the CAQ in the poll, it is the solidification of the Conservative vote in the Quebec region. Support for the CAQ is set at 43%; Éric Duhaime’s Conservatives are second, with 25%.

The CAQ ranks first among voters in the Montreal region. He has the support of 40% of voters. Next come the Liberals, with 25%.

“I don’t take anything for granted. We don’t take anyone lightly,” Legault said Friday, arriving in Drummondville to meet the mayor.

Legault also played down news of new legal challenges to his government’s policies.

The poll sets the tone for a busy political weekend. In addition to the CAQ meeting, Québec solidaire gathers in Montreal, and the PQ is in Boucherville.

The Coalition Avenir Québec kicks off its national convention in Drummondville